Skip to content
Home » Trip Report: What is up at Kinsman Pond?

Ring Around the Ponds.

This turned out to be a fair bit longer a trip than I expected. On the whole, this wasn’t a bad thing, although navigating in the dark, on less than ideal trails in the rain, made things a little more sporty than I’d have preferred. At a couple points, I was reminded of trips to Mt Isolation and Passaconaway, even while I was dreaming of that night I came down from Mt Adams. (No, not *that* hike down Mt Adams!)

Recovery from plantar fasciitis continues apace. There’s something of a detente at this point… things are going slow as molasses. I’ve been working on building mileage, rebuilding uphill endurance, and in short, trying to return to the previous state of me. And so, with this in mind, I brainstormed for where to hike next. That balance of challenging, but not too much so. Long(er) but not too much so. Elevation change, but again, not too much. At times, I think this exercise would give even Goldilocks fits.

A decision is reached.

Fortunately, redlining provides ample opportunities. I’m a couple hikes away from finishing my winter 48, and probably could cobble together a fifth within short order if I thought about it. On more than a few of the 48, I’ve hiked out all the nearby routes, which takes a lot of pressure off the equation. I can hack away at the “chad” — those silly connector trails, spurs, and so on that one might skip otherwise. And those are everywhere. Trouble is, most of them are tiny, often buried in the middle of stuff I’ve already done. Ugh.

But there was a bit of stuff I’d done on Cannon, and fortunately, I could link up a couple trails to make something fun. Creativity, folks, that’s the name of the game. Up to Kinsman Pond on its trail, which I’d not hiked, and oddly, I’d not really seen the pond either, and back down the Appalachian Trail to where it linked up with the Pemi Trail. When I did Flume and Liberty last September, I hiked out to the Pemi trail afterwards, out of curiosity for how the Cascade Brook trail crossed Franconia Notch, so finishing Cascade Brook would link up two stretches of the AT that I’ve done, spanning the Notch. Nice bit of redlining.

And so it begins…

I got a very much later than my usual late start to the day, owing to life conspiring against me. Pulling into The Basin parking area, I was hoping I’d not have to haul out my backup plan (park at the Tramway, and hike the bike path) owing to a paucity of parking. It was quite full, but not entirely so. There were indeed a few spots left; I declared victory. (What does *that* say about parking in the Notch?!) A quick jaunt down and through the tunnel under the parkway, and there was the trailhead. The crunch of trail underfoot was wonderful. The smells of the forest. I was home.

I followed Cascade Brook up along fairly easy grades… or so they were to me. It’s a fairly popular trail with “easy” day hikers, owing to the numerous break-outs where the cascades can be experienced from several vantage points. I passed several groups, at least one of whom breathlessly noted I was making quick time upward. A couple of the pools had families enjoying the cool waters, kids splashing around with reckless abandon, as is their habit. All was well with the world.

The weather was relatively mild, but it’s the second half of August, so… school time again. The expected crush of tourists thankfully wasn’t, but I can easily envision the brook to be coated in people seeking refuge from the hot of summer at the height of the season. And hey, even just to the eye, those cascades are lovely. I didn’t need it to be a hot day to appreciate them.

On to Kinsman Pond.

I got to the junction of the AT, where it breaks off, heading to Lonesome Lake. There was a fairly trivial crossing of Cascade Brook, although of course, it left me wondering how that would be in late springtime, when the brook is engorged with meltwater. I love hiking Cannon in the wintertime, but one thing I’ve noticed is that it gets no small amount of snow on its shoulders. So too the Kinsmans. There’s a reason why those stones are worn as smooth as they are.

Not long after, things pitched upward, and I climbed steadily and strenuously. I must be out of my usual shape, because it felt like an eternity, even though it was more like an hour or so. For the first mile, the footing was easy enough, mainly going up an old logging road. Around the middle of that trail, the climb breaks for a short spell, so you get a bit of a rest. The sense of solitude was there, and the character of the forest was lush, but wow, the trail was rough and rocky in more than a few places in the second half. You can make decent time down low, but up high is another matter entirely. Sweat was pouring off my brow… and then I forgot about that.

The pond isn’t much, technically speaking. If this is all that Fishin’ Jimmy was seeking, I’m not sure why. But there’s a sublime nature to the space. North Kinsman rises up, almost foreboding, and yet comforting. There are cliff faces, yes, but an overall smoothness of character. The quietude was pervasive and welcoming. A light drizzle began, dotting the surface of the water. Along with the thousands of lily pads, the scene felt complete. Serene.

Onward to the AT!

I moved along, passing through the tent site. Last I was here, I was heading up Fishin’ Jimmy, with my sights on the Kinsmans, and then Cannon, closing out my first round of the White Mountains 4,000 footers list. Back then, I had a short chat with the caretaker, but today, no such luck. Moving forward, I descended the trail. It’s weird, but little details came flooding back into my memory, like the footholds cut into the stone, the wooden steps, and the metal rung. Oh, and that the trail is both very steep and very wet. Yikes!

I got to the Lonesome Lake hut, and people were inside, having dinner. Ordinarily, I’d have poked my head in, but this time, I really didn’t have a reason. But I did spend a few minutes on the dock, savoring the view of the pond and beyond. There’s little question why the Cannonballs are so named. What’s particularly striking is how swiftly they rise up… something I felt acutely when I crossed them.

And then, the return.

I turned onto the Cascade Brook trail, finishing what I started. Up on Fishin’ Jimmy, I’d come across a thru-hiker who was setting up her stealth camp, and we’d chatted for quite some time; probably 45 minutes or so. I learned a few more things about the trail, so in total, it wasn’t time poorly spent. But now, it was well and truly getting dark, and there was still the rain I was dealing with. The trail was unquestionably wet, the rocks a tad slippery.

The book describes the trail as fairly easy, and for the most part, I’ll give it that. But there are a ton of rocks and no shortage of mud. The grades were, in all fairness, easy, but those rocks slowed things down measurably. Near the bottom, I crossed Whitehouse Brook, which might have been totally trivial at high noon. By headlamp, it was a bit more tricky than that. Finally, I saw the Pemi trail sign. I’d linked up with where I’d gotten to last autumn. Another trail crossed off the list. Huzzah!

Getting back to the car was a little rough. I started out on the Pemi trail, but once across Cascade Brook, inadvertently crossed the Pemigewasset river, too. That put me on the wrong side, and ultimately, I just bagged it, clambered up to the roadside, and trotted up to my car. At that point, I was pooped. Elated, but pooped. I’ll come back to fix that of course, because if the top half of the Pemi trail is any indication, the bottom half will be fun, too. But in the dark, it was a smarter decision to cut to the chase. As sometimes happens.

Looking back, and looking forward.

Throughout the day, I thought about the AT. Notably, this time on Fishin’ Jimmy, I was going northbound, which is my planned agenda for when I finally get to set out from Springer Mountain. It was obvious to me that the normal way to Kinsman Pond was by that trail, not by its namesake path. But from this side, Kinsman ridge is a tough nut to crack, no matter which trail. Every AT hiker I’ve met has commented on the toughness of the granite state. This hike was no small testament to that sentiment. It wasn’t the insane climb up out of Pinkham Notch on Wildcat E, or the endless rock hopping of the Presidentials, but the trail certainly extracted its pound of flesh.

Basin-Cascades trail was fairly easy, but everything else threw some measure of roughness my way. It was deceptive — if you just look at the elevation changes, there are a lot of places where you think things should be easy, but they aren’t. That said, nothing good comes easy, and wow, standing alone on the shores of Kinsman Pond, after an arduous trip up, was worth the effort.

Nuts and Bolts: If it’s available, your best parking is at The Basin parking lot. From there, follow the signs to the underpass, and cross the Franconia Notch Parkway. The trailhead will be obvious at that point. If parking at The Basin is full, you could always swing around to the opposite side of the parkway (there are lots on both the northbound and southbound sides, not linked to each other, so this entails driving to the end of the notch and coming back around.) Else, you’re stuck parking at the Tramway and hiking down the Pemi Trail. Not that the Pemi Trail isn’t worth it, mind you.

For the AT section, blazes are the usual white stripe. Anything else is generally blue. The blazes aren’t always obvious or plentiful, but I always seemed to find a trail sign or some other easily recognizable indicator. Absent that, for almost the whole way, the trail is pretty obvious. One note: there’s a “<— Trail” sign on Basin-Cascade, and it points “vaguely” in the direction of the brook. Cross at that point, despite the fact that it almost looks like you stay “this side.” If you find the trail gets exceptionally muddy and the brook is still on your left, backtrack to the sign. Don’t ask me how I found that out. 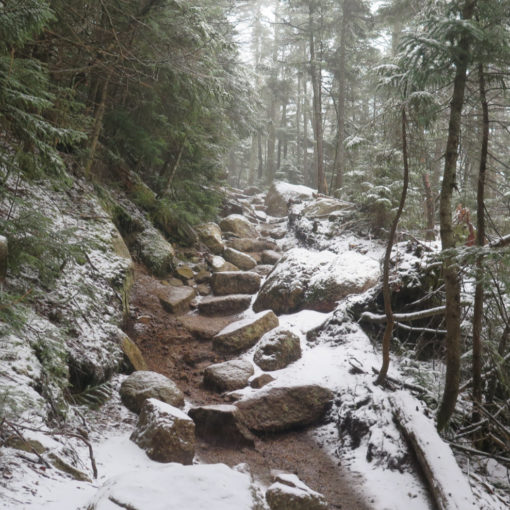 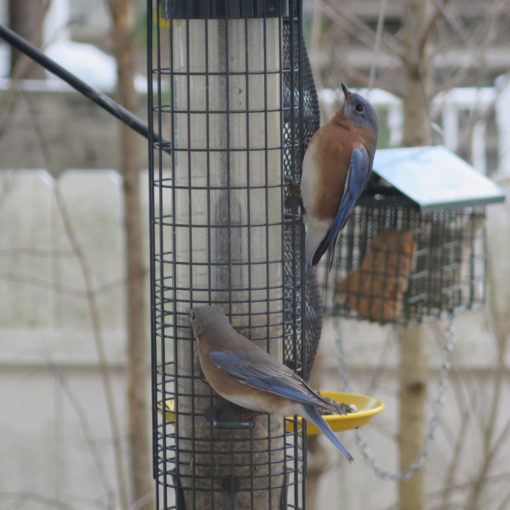 3 thoughts on “Trip Report: What is up at Kinsman Pond?”