60 dF at trailhead, approx 50 dF at summits, 15 MPH winds above tree line. Cloudy to start, with partly sunny conditions above treeline. Cloudy again on the summit.

This still isn’t even remotely one of the easier hikes in the Whites. Honestly, I think it’s harder than Washington. But I think that today, I was able to make peace with the mountain, after having felt unsettled about it from my hike last year.

There are multiple things that make this a hard hike. Not the least of which, Adams has some of the biggest elevation gains in the Whites — you’re on the hook for more than four thousand feet. Indeed, if the elevation gain itself (of today’s hike) were a mountain, it would sit on the list between Liberty and South Carter. If it were that alone, the hike wouldn’t be so hard. But it’s both steep and rough going. For the entire day, I had to contend with mud, slippery footing, and so many rocks, that it was impossible to count.

If you’re new to the 48, leave this one for later on — get to at least 20 or so, and I’d give Adams its own day. Adding on Madison is fine if you come from a sensible direction, but I wouldn’t kick off your list by doing a single-day Presidential traverse, starting from Madison, because you’d get to Jefferson and throw in the towel.

The day started out cool, but overall clement. As I ascended, the clouds began to part, and I had something of a view into the valley below. But just as I started to get to the level of Edmands Col, I became aware of a bit of drizzle over there, where the wind was coming from. OK, that happens, and it sorted itself out by the time I crossed over Adams IV. But frustratingly, as I approached the summit of Adams itself, clouds swept in and cut the view to a few hundred yards at best. Meh.

As often happens, I met some very nice people along the way, but oddly, especially for the Saturday of a holiday weekend, the mountain felt bereft of hikers. This seemed doubly weird, because as I drove through Franconia Notch on the way up, I noticed the parking lots there were “snug.” Doesn’t matter, and honestly, I liked having the trail to myself for the times when I couldn’t see or hear anyone.

I’m going to let the photos tell the story and then chime in at the end.

So it was a good day out. I think the success of the day was in not trying to nail down two summits. Standing on top, I could intermittently see Madison, and the thought crossed my mind a lot. But I’m glad, in the end, that I’m waiting on that one. Not the least, I want to come in from a different direction than last time, but also, the sun is setting a lot faster these days. I really didn’t relish the idea of stumbling and bumbling my way back to the trailhead in the dark. Mt Adams was just fine on its own.

Speaking of stumbling and bumbling in the dark…

I’m continuing to see hikers trying to be ambitious, but they’re either under-equipped, or showing a lack of awareness of fundamental outdoors skills, or both. Ambition is awesome, but without smarts, it can get you killed. Especially in the Presidentials, but also anywhere in the Whites — above or below treeline — it’s important to regard the weather as an adversary. I had a wonderful outing today, but all the same, the speed at which the summit went from having a glorious view to barely being able to see the second cairn was measured in a handful of minutes. Seriously, this all happened right in front of my eyes. If I hadn’t seen something similar happen during my Pemi Loop last week, I’d have been more surprised. Even still, I remain amazed, because really, you’re talking a lot of air, water vapor, etc moving through space… which should underscore the amount of energy that’s trucking around up there.

If you’re not sure, or your skills are rusty, or whatever, there are places that can teach you. The well known “three letter acronym” outfitters, plus places like LL Bean and whatnot, can help you find a class. Making a campfire that will keep you warm isn’t just a matter of flinging a match at a pile of leaves. Your cell phone doesn’t count as “having a flashlight.” Be prepared both mentally and physically. The mountains are no place to find out that you got caught short.

Nuts and Bolts:  Getting to Adams is a matter of driving up 93, then following Rte 3, 115, and 2 until you see the “Lowe’s Gulf” gas station on the left. Park there, and give the folks inside a buck for a day’s parking. Side note: the guy’s grandfather is the trail’s namesake. Pretty neat.

Unless you’re very seasoned, give yourself a solid day to bang this one out. The trail is rocky from start to finish. Down low, you’ll be stepping around and over them. In the middle, you’ll be climbing up them. And above treeline, you’ll be picking your way amongst them. I think the slowest progress I made was above treeline. Second-slowest, ironically, was on my way down through the middle section. Downhill felt a lot harder than uphill.

Also, on that score, be careful if the rocks are even the slightest bit wet or covered with leaves. I ended up sliding down a sloping rock until my feet were stopped by another rock. Of course, thanks to physics, it didn’t end at that. I was fine in the end, but it did involve taking a nasty tumble. Lowe’s Path is on the north side of the mountain, and so doesn’t get a lot of opportunities to dry out all that well. 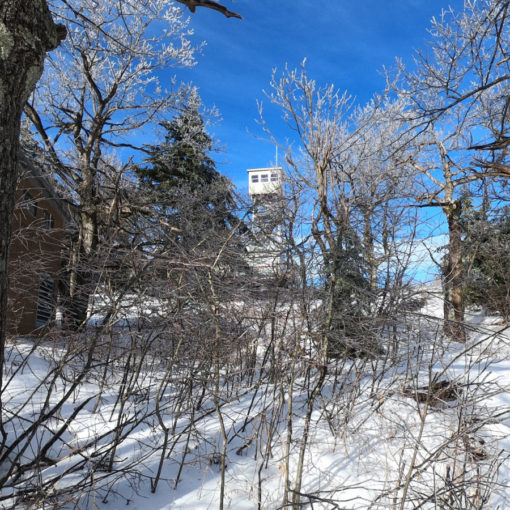 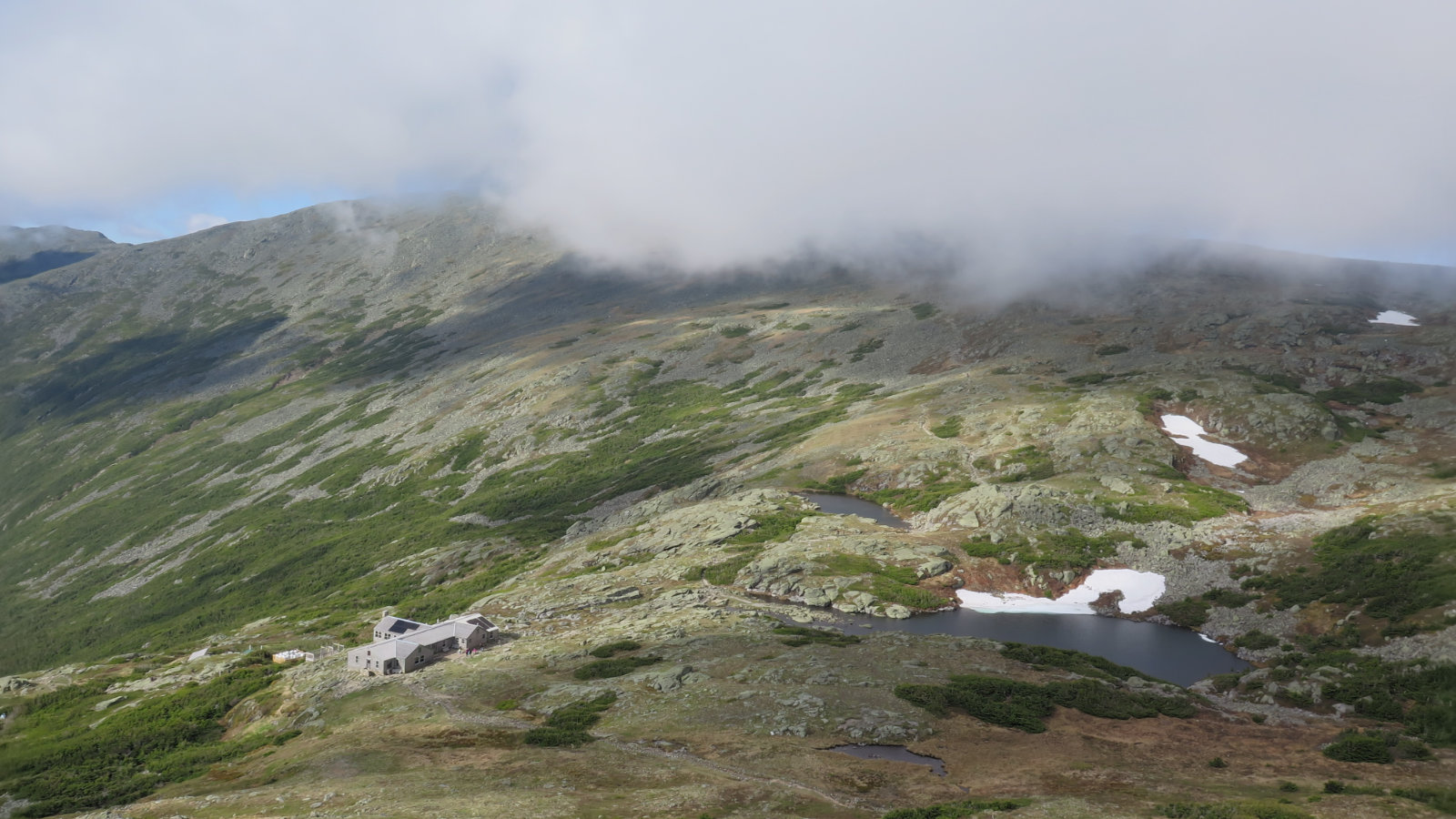 With only minor annotations, I’m going to let the pictures tell the story here. Words will only get in the way. These […] 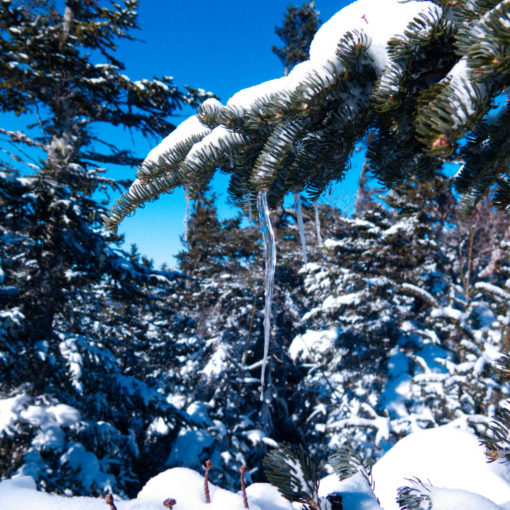