So it’s been a year…

Technically, the 1 year anniversary of this project was my last trip — up Carter Dome, and on a much sunnier day than today. Maybe spiritually, though, this one was closer to the mark, because when I stood on Tecumseh around this time last year, it was cloudy to the point of not having a significant view. As was my experience today on South Carter.

I was thinking all day about the fact that I got a slow start to the morning. Maybe I might have bagged Middle Carter, too, had I been able to get a move-on. But honestly, the trail was conspiring against me today as it was last week. On Carter Dome, I couldn’t seem to fall into a groove, in terms of moving through space. Everything seemed overly effort-full. Today, on South Carter, the snow from last night, while not much in terms of depth, was very powdery. Topping that off, the wind howled, and route finding kept robbing me of a few minutes here and there. In the end, it became apparent that I was going to have one kind of experience, not by my choice, but as always, a day in the mountains is a rare gift. Each one is unique, and a treat to be savored unto itself.

Starting out from the trailhead, the snow from last night initially manifested itself as a slightly wet, not-quite-mashed-potatoes that seemed to ball up under my snowshoes. Going up 19 Mile Brook, the trail was in great shape, as one can expect from the main route to an AMC hut. I made time. Not far away from the breakaway up Carter Dome trail, I met a trio of intrepid adventurers who’d spent the night at the hut. We exchanged some pleasantries — I was glad to hear my trip report from Carter Dome helped them plan their trip. Feedback keeps the motivation up.

I turned onto Carter Dome trail, and that’s when things started to get weird. Yep, the snow. As I gained elevation, it became more powdery, and started to be more like ball bearings. Each step saw me slide backward a little as I went up, and like last week, it wasn’t much individually, but in total, conspired to sap energy and momentum. (Not to mention the fact that when taking a high step, you want every tiny bit of stable footing you can get!) But I resolved to manage this, and so pressed onward. My per-mile time was still hewing pretty close to what I had done on 19 Mile Brook, which kept me happy. I was thinking about my late start and planning on a possible turn-around time, so keeping time was a boon.

Birch glades are always enchanting. They do stand out a lot more when there’s rich greenery around, which wasn’t the case today, but nonetheless, there’s something about the sense of airiness, the stark trunks against the background… again with the gifts that the trail gives. Today, though, there was an added feature: the wind. On a map, as on the ground, it’s pretty easy to see how Mt Height and South Carter form a valley, through which the Carter Dome trail passes. And it points pretty much exactly straight at Mt Washington. And there was an insane west wind today. The Observatory called for speeds around 50 MPH, heading for 75+ in the evening. I had no reason to think they blew that forecast today.

Moving on, I noticed what was happening on the ground with the wind. Sure, the trees blocked much of it, but enough made it to the level of the trail that the footpath through the snow was slowly being erased. By the switchbacks, I was seeking the nearly imperceptible disturbances in otherwise featureless snow that suggested the trail continued ahead — there were very few places where the trail was outright obvious as it’s been on other mountains. And it didn’t help that the blazes were, in many places, covered up by snow. I pressed ahead, determined to make progress.

I got to the junction where Carter-Moriah broke off to the left. Now the route finding was becoming a big issue, and GPS was the only way forward in many stretches. But then, the trail traversed the west side of the mountain, and wide gaps in the trees showed the way forward — and my recall of the trail from last year kicked in, too. A last push upward over the final quarter mile, and I was at the summit. I’d chosen the Carters for today on account of the enclosed summit, but the wind was ever present. The clouds obscured a view of anything but the closest of trees, so with little reason to stick around, I grabbed a summit selfie and jammed.

All the way up, I was thinking about whether I’d have a trail to follow on the way down. For the most part, yes, but there were a few places where I was surprised to see the hand of Aeolus was already erasing the traces of my passage — in at least a couple sections, my footprints were entirely blown away and only a smooth snowy surface remained. I hustled down, determined not to spend any more time route-finding. It was slippery in some parts, but overall, a relatively quick descent.

I’m thinking back to how difficult it was to find the way across to Middle Carter last year. How I couldn’t find a groove on Carter Dome last week. And today was no walk in the park. I’m imagining it, I’m sure, but part of me thinks these mountains play hard to get. That being said, Carter Dome still has some of the best views around. All three mountains are very accessible, and really, they’re not the hardest ones out there. So while I’ve had a couple hard outings that happen to have coincided with these peaks, I’m going to say it was pure coincidence. There’s going to be a trip back here over the summer, I’m sure.

Nuts and Bolts: Nineteen Mile Brook Trailhead is on Route 16, a bit over six miles south from Gorham, after you turn off Route 2. When you pass Camp Dodge road, begin looking to your left. It’s pretty obvious when you see it. 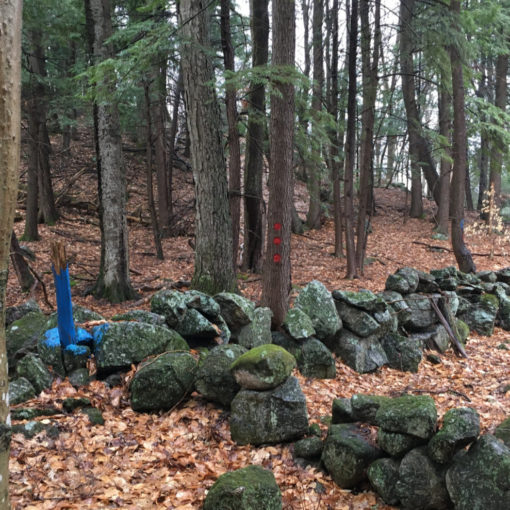 Fox Research Forest is an easy going hike, with modest grades and smooth trails. Forget the expansive views, and just go to enjoy the forest and the trees.