15 dF at the trailhead, 10 dF at the summit. Winds were non-existent in the lower elevations, an uncomfortable breeze at the summit in the exposed areas. Cloudy/foggy with snow flurries all day.

I’d wanted to bag both peaks. But events conspired against me. Notably, the snow was still that yucky unconsolidated powder that slips a little underfoot. Not enough to really stop you in your tracks, but forward progress was inefficient. North Twin isn’t a particularly hard hike, with a trail that really doesn’t have much technicality. But it’s arduous. Not the least, it’s three thousand feet of elevation gain. But while many other mountains have at least as much, North Twin trail follows fairly easy grades for the first half, and then you get whacked hard in the second half on a fall-line trail. Add that slippery powder to the mix, and by now, your thighs are probably burning, and you’re struggling to catch your breath just imagining it.

It’s a shame, because I love that col. It’s very quick and very easy. Just a couple scrambles. The worst of it is in warmer months, when there’s those stupid, trail-width mud puddles that seem to extend for about 20 feet each, with far too few stepping stones. I was looking forward to leaping across those spots, sans mud. Alas, t’was not to be.

Starting out was pretty nice

I’m going to give a shout out to Franz, the guy who runs the Seven Dwarfs Motel, which is located at the end of Little River Road. Very nice guy, who’s opened his parking area to hikers, for the paltry “suggested donation” of ten bucks. For that, you get to slice about a mile off the road-walk to the trailhead. Totally worth it.

I’m going to suggest that if you do park there, do the right thing: leave him a tenner. It’s good karma. Not enough that he got slammed by COVID for both Memorial and Labor days, but with basically nothing for snow, no-one’s taking their sleds out, either. His business has taken a one-two punch from all that. If he’s not got the door open, just leave your donation in his mailbox to the left of it, or under your windshield wiper. (As of this writing, he has a bum leg, so try to leave it in the mailbox if you’re at all able. Do the guy a favor for all he’s doing for us.)

Anyway, we got into talking a bit, which probably slowed me down by ten minutes, but that didn’t matter. As I said, nice guy. He likes hikers, and was able to tell me a bit about the amount of snow they’ve gotten up there lately. A handy bit of information, right? He also asked me about my preparations, and I got the sense that he’s the one to notice if a car’s been in the lot a bit too long, and then pick up the phone.

Eventually, I hit the trail…

His first instructions were to head down the skimobile trail, and I’d see a cellar hole with a chimney. Which I did. It reminded me, perhaps obviously, of the fireplace on Starr-King. The sled trail was in nice shape, packed down for the most part, and so I made good time. Turning onto the fire road, I walked up about another mile or so before hitting the trailhead. The two segments had taken me almost an hour at that point, so I was already thinking about the amount of time I had left in the day.

Last time I was here, I hiked up the Fire Warden’s trail on Mt Hale, and wow, that was an amazing day, with warm sun on a warm autumn afternoon. Today was the polar opposite. (Wow, that was a bad pun.) The trail was nicely tramped down by at least a couple hikers on snowshoes, so as much as conditions permitted, it felt like I was moving along. Much of the trail was very easy. The “bushwhack” on the east bank of the Little River had some ups and downs, some minor water crossings, and some downed branches, but nothing out of the ordinary. And the third crossing was mostly straightforward, with only a couple spots where I took a long step over an opening in the snow bridges.

SAFETY NOTE! As of this writing, I was able to cross the river without issue. The snow bridges are young, however, and the ice still a bit thin in places. Today’s temperatures were sub-freezing without question, however, the water still rushes below, and as long as the river is liquid, it’s not frozen. (That last bit should be common sense, but all too often, “common sense is neither common, nor sense.”)

Obviously, no guarantees can be made that the bridges will be intact, or even robust enough for safe passage, at the time you try crossing the river. Take all appropriate precautions. It should go without saying, but if the bridges don’t appear solid, come back another day. Perhaps consider summiting via another, safer route.

And now, the fun part of the hike

So being safely on the other side, things turned up a few notches. Instead of gentle grades that rose almost imperceptibly, now the trail pitched resolutely upward. It was still moderate, but with only a couple exceptions, undeniably “up.” I was breathing harder, and making obvious effort. Notably, though, my snowshoes’ televators remained folded down. But that slippery snow became much more of an issue.

At about 3,000 feet, the trail went from “wow, that’s a bit more work” to “why so homicidal?” The trail that went undeniably “up” was now a relentless climb up the fall line. By around 4,000 feet, the wind above was becoming the wind around me, although with all the work, it didn’t feel unbearably cold. Sure, my face felt it, but the rest of me was happy I wasn’t overheating from all the work.

Keeping tabs on the time, it became slowly apparent I wasn’t making it to South Twin today. That easy crossing of the col… well, about three miles or so up the trail, my thighs were on fire. Between the slippery snow and the steep trail, I was happy just getting one foot in front of the other, forget taking a decently long stride. I might have been covering around one mile every hour, when on more moderate terrain, I could have been closer to two. At noontime, with still a lot of the trail in front of me, I started planning. At a quarter to two, I decided: if I wasn’t within spitting distance of the summit by quarter past, I’d consider just turning on my heel and heading back down.

There had been flurries all day, I was terribly sore at this point, and the snow was definitely slowing me down. And the clouds guaranteed that I wouldn’t be able to say “well, at least there was a view.” I was putting in miles instead of having a great day on the mountain. Memories of stellar views everywhere this past glorious October and November ran around my head, and I’m not sure it made things better. This was the fifth outing in a row that featured clouds and no view. It happens. Then again, the first and second Pemi Loops were “occasionally” clear. Might be something there.

The map showed the trail breaking over the top, and the contour lines were nice and wide. In time, I too stepped into that region. It’s funny how you start to feel better when the trail eases. I was still nearly half a mile from the summit, but at least I could take some longer strides and make a little time. Opening things up made my legs feel better, and while I committed to turning back at the summit, at least physically I wasn’t feeling like a pile of old rope nearly as much as before.

I crossed the trail junction, and turned to the outlook. The trail rose a little, and with no fanfare, I crossed the hump that was probably the actual summit. The view was thin, although I could see what might have been South Twin dimly through the clouds. And with that, I turned back for the car.

Most of the way down off the top was skiing on my snowshoes. But afterward, things eased, and with sure downhill footing, I began to finally make good time. Back on the last mile of trail, things got seriously easy, to the point where it was almost like walking on the fire road. I finished the last 45 minutes or so under my headlamp, but those were quick miles. This was a long day that was arduous as heck. I can see myself doing this again in the summer, with lighter gear. Bagging South Twin, I see myself coming in from Galehead, or perhaps Zealand, maybe via the Lend-A-Hand trail from Hale. Maybe it would have been nicer with more consolidated snow. But wow, it was something else today. Yikes! Most of all, it was another lesson: that you don’t get to hike the mountain you want. Rather, you hike the mountain you get. Put another way, you have to accept the good with the bad.

Nuts and Bolts: Little River Road is a few minutes past Fire Road 304. Drive up 93, take Exit 34 for Twin Mountain, and follow for about 15-20 minutes. When you get into Twin Mountain, look for the road side sign for Seven Dwarfs Motel. It’s huge, and has a gigantic red arrow. Also nearby is the Wandering Moose Cafe and Gift Shop. Good coffee, reasonably priced, and served with a smile.

Trailhead will be at the far end of Fire Road 304. Blazes are Yellow. Note that if you continue on to South Twin, the trail is officially a side trail of the AT (which crosses South Twin’s summit) and so the blazes will turn blue, just south of the junction with the North Twin outlook spur. 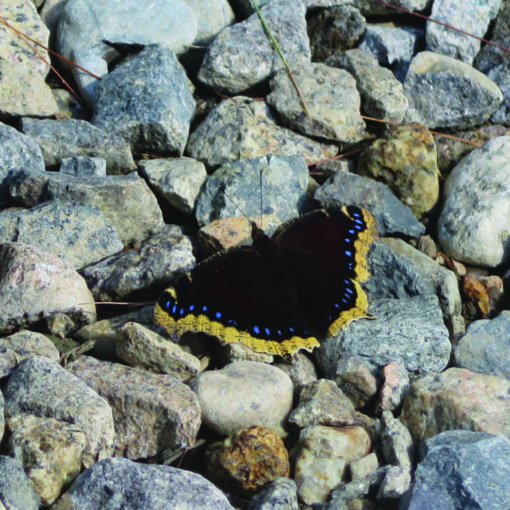 5 thoughts on “Trip Report: Hiking Up the Steep Slopes of North Twin Mountain”