15 dF at the trailhead, low single digits at the summit with a ferocious wind chill. Winds were negligible in the trees, about 25-30 knots at the summit. Cloudy/overcast, becoming partly cloudy toward the later half of the afternoon.

Trailhead: 1040. Summit: 1345. Trailhead: 1545. Budget about half an hour to walk from the parking area to the trailhead. At the moment, there is a nicely tramped out footpath that makes for comfortable travel.

What a difference a week makes!

In a nutshell, the lede encapsulates today’s outing. Last week was a struggle to get to 3,600 feet; still at least a mile from the summit, I was exhausted and so I turned back. Today, on the other hand, was a relatively quick jaunt to last week’s high point, then again to the ridge. The last push was a bit more lively, ascending what is basically a steep fall-line trail for those final few hundred feet, but still relatively easy — and with the summit so close, there’s always that little bit of extra motivation that comes out to play.

Thanks to a herd of hikers, the monorail is finally in very nice shape indeed, and that included the walk to the trailhead. There was that opening climb, which, like on Carrigain or Moriah, is one hell of a way to start out. It’s almost as if it’s a quick quiz of your resolve: “are you really sure you want to climb this mountain?” But after that, the trail ascended by way of mostly moderate grades, and everywhere, sure footing was in plentiful supply. I made exceptional time for the first couple of miles, clocking in sub-30 minute miles. Of course, that didn’t last, and as I got past the halfway point, the grades increased steadily, and I slowed down measurably. But I still made better time today.

OK, so what made it so special?

Last week, the snow was so fresh on the trees that most of the way, things were almost entirely white. That the skies were overcast didn’t help; the light was flat and uninspiring all day long. Over the week, things settled out, so down low, the trail had a lot of greenery, slowly yielding to outright marshmallow-white. No kidding, in the higher elevations, it was almost like the trees were the sylvan incarnation of the Stay-Puffed Marshmallow Man. But all day, the visuals were much more interesting to look at, keeping my motivation quite high. It fed a welcome sense of joy that’s been lacking recently.

Today started out overcast, but by noontime, it was clear the sun was fighting a valiant battle against the clouds. By mid-afternoon, it was obvious the skies were going to open up pretty seriously, and in fairly short order. By late afternoon, there was a distinctive honey-hue to the light. On the drive home, it only got better. I was treated to views of the Franconia Range and points south of there that were positively golden. Wow!

There’s no such thing as a free lunch…

That said, it wasn’t without a distinctive effort against the wind. For the most part, I felt a moderate breeze in the trees, modulated by whether the forest was mainly deciduous or coniferous. But as I approached the ridge, the trees, shorter for being in the higher elevations, sheltered me from Aeolus less and less. Obviously, that’s a battle for which you’d better come prepared when in the mountains, and yep, I had to add layers as I ascended.

On the summit itself, I got the lash full-on, and yikes, it was bitter. Thankfully (and with no small sense of irony) the view wasn’t much, with the clouds not yet fully swept away — I was given no reason to dither. I grabbed a couple quick photos of Owl’s Head, and then dashed back down to the shelter of the trees. It was several minutes before I felt warm again. Yowza, the wind packed a punch today.

But sometimes, you get an easy ending.

And then it was a quick dash back to the car. I made surprisingly quick time down to the trailhead. Obviously I was helped by going downhill, but even still, it felt like a quick return. I’d be getting back to the car significantly before the sunset, and the aforementioned golden hues, draped all over the landscape on the drive home. Just as nice, because of some quirk in today’s weather, the majority of the blue skies were to the north, so I had some of that to gaze at, too. Nice!

Walking out along the fire road, I reflected back. Last week, it started to feel like work fairly early on. And comparing it to Galehead and North Twin, everything fell into a pattern. All three of them had marginally tramped-out trails, which felt greasy throughout. As I took just about every single step, I could feel my feet slip backward a bit. Today, in contrast, featured a lovely monorail that was very stable, so every step felt sure, with no wasted effort. It fits in with the lede: what a difference a week makes… vive la différence!

Nuts and Bolts: Trailhead is on Route 3, just before the Gale River bridge. Take the Twin Mountain exit after Franconia Notch. Follow about 5-6 miles and you’re there. Park before the gate. As of this writing, it’s not particularly ploughed, but rather, fairly well driven-over snow. Take care not to get stuck.

Trailhead will be after a mile and a half (or so) road walk down the fire road. Blazes are blue: the trail branches off the AT, so it’s actually blazed quite well. Up on the ridge, I wasn’t able to reliably spot blazes, owing to the significant amounts of snow on the trees. That said, right now, the trail is quite obvious: keep your feet on the monorail and you’ll get there just fine. Pay attention near the summit: there’s a loop trail up there. 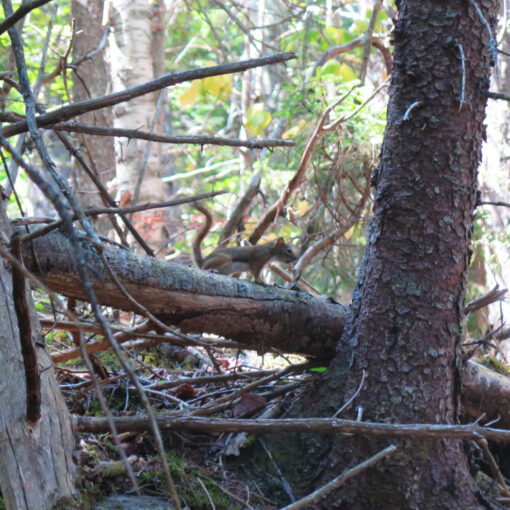 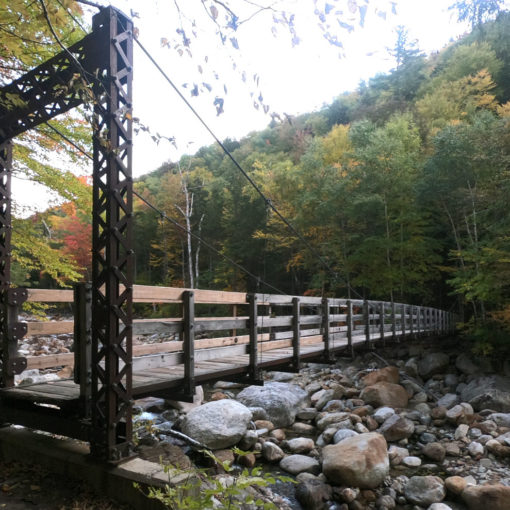