MW-OBS called for mid-40s on the higher summits, with winds in the 15-30 MPH range. NWS called for low-60s in the nearby towns. I felt seasonably warm weather, shorts and tee-shirt if being a bit cool is acceptable for you. If not, maybe a long-sleeve tee for the summit, perhaps a hat, and you’d have been fine. The weather was appropriate for late October autumn, but it was certainly on the warm side of that scale.

Winds were basically null in the trees, and pleasantly breezy on the observation tower. Unbridled sun, with visibility docked only by the nearby mountains and the curve of the earth. Textbook day for being outside enjoying nature.

Tempestas ipsa loquitur! (The weather speaks for itself!)

I suppose there’s some things that anyone could say about today. The one thing that was absolutely beyond reproach was the weather. Clear skies, seasonably warm weather, almost limitless visibility (I mean, there are nearby mountains, and the curve of the earth itself that gets in the way) and fabulous conditions in all other respects… where’s the downside?

This was my sixth time on the mountain, and Carrigain still pulls no punches. The textbook definition of a monadnock is a solitary mountain that rises from a plain, and the argument that Carrigain is solitary or sits in a plain isn’t even tenuous. But that said, when viewed from afar, its very recognizable profile does seem to rise up on its own much more than most other mountains in the Whites. On foot, it plays out about as hard as it looks.

It’s a tough nut, but a fair one. The trail, once you’re at the “meat and potatoes” portion of the hike, rises very swiftly and definitively. Uncharacteristically for the Whites, there are a few switchbacks here and there, but there’s so much fall-line (or effectively so) hiking that it’s still a lot of hard mileage. There are a lot of rocks, and if it’s even slightly wet, there’s ample mud. For all the time I’ve spent on it, there’s no question as to whether you’re on the approach or actually ascending, no doubt that the terrain forces you to pay attention to what you’re doing.

And yet… while Carrigain may be tough, it can be benevolent. Crossing the knife edge of Signal Ridge when the weather is clement yields wonderful, expansive views to the north and east. Its height and location on the southeast edge of the Pemigewasset Wilderness puts you right in the middle of things. You have a commanding view of an absurd number of four-thousand footers and other prominent peaks. When it’s much less than perfect, you get to contemplate the motion of clouds as they pass across the ridge, which is awe inspiring.

Aside from the non-existent clouds, what caught my attention this delightful day on the summit were a few Canada jays that were making the rounds. The all-encompassing view was certainly there, and I spent some time pondering the (relatively) low-slung eastern half of the Pemigewasset Wilderness. Hiking out to Desolation and Stillwater still rank in my mind as some of the most peaceful places in the Whites, and I still feel a tug from those places.

Hiking out, I made a point to visit the pond I saw on the way up. It sits in the middle of the trail bifurcation, and there was no shortage of brush and prickly brambles in the way. Even seeing it from the trail is hard if the sun isn’t in the right spot. But after about ten minutes of getting my arms and legs scratched up, I finally got to a little quiet space. For all the traffic on the trail, it felt a bit set aside, almost hidden in plain view.

With the sun well and truly on its way down, I enjoyed that period where the light kisses the tree tops, lending the air a golden light. With the remaining leaves, it was yet more trail magic. And then… the car. It was a hard, but very enjoyable afternoon. A day you wish would last just a little longer. But such is autumn. Gather ye rosebuds while ye may.

Nuts and Bolts: Turn onto Sawyer River Road off of route 302, south of Crawford Notch. From the Highland Center, it’s 11 miles, and about 15 minutes. If you’ve gotten to Fourth Iron campsite, you’ve gone a smidge too far.

In the warmer months, the trailhead will be about two miles down the road. Parking is across from the trailhead. The lot isn’t huge by any stretch, plan accordingly.

Note that the map below shows the trail going to the left at the bifurcation. The “correct” trail takes the right side of the fork. At this decision-point, there is a lot of brush and stuff blocking the old trail, directing you to the preferred (and perhaps slightly easier) way up.

It was cold, it was windy, it was beautiful. In short, I wouldn’t have given it up for the world. 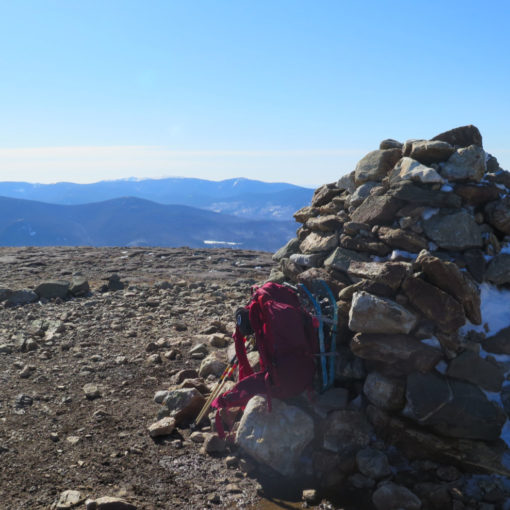 Simply put, hikers came out from the woodwork to enjoy glorious weather on Mt Pierce and Mt Eisenhower.