Skip to content
Home » Trip Report: Hiking Ike, and then Linking to Lakes

Via Edmand’s Path, Crawford’s Path, plus loop trails on each summit. 10.5 miles round-trip.

60 dF at the trailhead, mid-50s dF at the summits. RH ranged from about 50% to 70%. Winds were negligible in the trees, about 12 MPH on the ridge and as much as 20 MPH at the summits. More clouds than sun, but overall, a bright day throughout.

Paths and Loops and Hut, Oh My!

After the Pemi Loop, I thought doing a Presidential Traverse would be a neat idea. But so far, the logistics are proving to be a bear, and so it became a mental millstone. I just wasn’t thinking clearly about future hikes. Finally, the idea of nailing down some trails I’ve been wanting to do, but wouldn’t fit neatly into the traverse paradigm, popped into my head, freeing me to back-burner the traverse. Freedom!

Checking the big spreadsheet of doom (it’s the only way I could possibly keep track of my grid) it came clear that I had nothing left but a handful of… Presidential peaks left before I’ll have a summer 48 in the bag — and just doing Jefferson will complete my third in any season. With today’s hike, I got to tighten the remaining mountains to all northern Presidential peaks, and there will be some exciting hikes coming up.

But did I get some mileage relating to the traverse anyway?

My summer to-do list had Eisenhower and Monroe. One thing that was nagging at me was the feeling I had last summer when I hiked from Webster across to Eisenhower. Just to put this out there, I really love Ike’s peak. From afar, there’s a beauty in its nearly perfect round dome. It’s the one where you can spot the summit cairn from at least two miles away — how many other mountains can you do that trick? And it’s got a view of Washington that makes it seem really nearby. Like you could hike there in moments. Even though you really can’t.

I could fairly easily bag Monroe, and from there, make a quick trip down to Lakes of the Clouds…

What about trails not actually seen?

One of the other goals for today was to hike Edmands Path and actually get a look at it. Last time I was on that trail, I wasn’t actually on it, but hiking above it, on a few feet of snow. One of my biggest memories is being shoved uncomfortably toward the outside edge of the trail near the top, where you’ve got a lot of air before a very long drop. The quick of that is because the snow has you a few feet up, you’re now in range of branches that encroach on the trail. Lower down, passing people keep them in check, but not so much higher up. They can grow however they want, and so they do. It felt a bit scary, because I felt the trees really “pushed” me toward the edge. So would I find the same mechanics at work in the summer?

In short, no. It was a bit amusing reading my post from back then, because it put me in that moment pretty well. I wondered then what I wondered today. And to answer that question, the trail was in one sense easier, in another, it was just as hard.

For the “quick” 3 or so miles of Edmands Path, it started out fairly easy, but got serious without much dawdling. Duff became steadily more rocky, and then it got steep, and rockier still, and steeper still. In fairness, it wasn’t nasty at any point, but things did get a tad spirited. Nonetheless, I charged uphill at a decent pace, and well within 2 hours later, I was standing on top, enjoying the 360 degree view. This is an epic summit.

Then it was onward to Madison!

I met a guy who was hiking the AT NOBO, and so we joined forces. It was pleasant to have a companion, and we filled time chatting about the AT. He wanted to know what was ahead, just beyond Washington, because as anyone can imagine, he was watching the weather while trying to make miles. I was happy to hear about the Smokies, Duncanon, and McAfee’s Knob. He’d started in February, pretty much pre-COVID, and if it’s any sense about how much you can avoid the mundane world, he had to ask who Biden chose as his running mate. Ignorance is bliss.

Last time I was up here, I loved crossing over from Pierce. Just the other day, I was looking back at some pictures, being quite happy. But today, when I found myself hiking past Franklin… there’s something about walking across that huge, flat expanse. Looking out over Boott Spur, the Montalban Ridge… being able to look over this enchanting near, yet far range. One source calls that area “Monroe’s Lawn” but I haven’t found independent verification. The name fits, though.

Monroe was easier from the south, and that’s obvious to anyone that’s done it from the north. All afternoon, we were looking to Washington, and at times, being totally jazzed that you could actually see the summit. And now, here I was, able to take that coveted picture of the hut, the two tarns, all with the background of Washington’s actual summit, instead of its cloud bank. Nice. I descended to the hut, and there was coffee to be had while we sat on a bench outside, soaking in the sun’s warmth. It was a welcome counter to the cooler temps. Autumn is a few weeks away, and I was trying not to think of that truth. (Though in fact, the changing of the leaves, and consequently the trail, is a magical time for me.)

Then it was time to get bummed.

It was time to part ways: me back to my car, and him ahead to Katahdin. Still jealous of all the AT hikers, even though my ankle is still giving me a small amount of grief. (It’s mostly better, but it pipes up from time to time.) On the return, I took pains to ensure I took the appropriate side of any fork, to be sure my redline is complete. Blueberries along the way were plump and tasty, particularly on Eisenhower. Heck, some of them were the platonic ideal. And then down Edmand’s Path. It’s been a familiar part of the hike, when it sets in that the trip is almost through. Soon I’ll be home, thrust back into the world of going to work, doing the laundry, taking care of the rest of the mundane chores. Exploring will have to wait until next week. Good thing the day wasn’t completely over, though.

The surprise moment was being just around 3,300 feet, and thinking “hey, maybe I should look around, just in case there are Indian pipes.” I probably should have bought a lottery ticket on the way home, because I did stop right then, look down and to the side, and spotted one right away. Then I found 20 or so clusters in the next 50 yards. I’ll probably never see another one again now, but it was pretty weird finding so many of them just like that.

I spent the last mile or so hiking with a nice woman from Long Island. I never seem to catch the perspectives of the people who can’t just hop in the car and be in the mountains, so it was nice hearing her thoughts. The trail eased, and then we left the rocks for duff. A simple water crossing that wasn’t so simple last I was here, and we were back at the trailhead.

It was a good day out. Thinking back, getting out of bed a couple hours earlier, I might have been able to make a decent bid for adding on Washington. Then again, there’s a trail I’ve been wanting to do over there, so it’s just as good that I didn’t bag the old rock pile. So stay tuned…

Nuts and Bolts: From Twin Mountain, turn onto 302 and head south. You can either take the Cog Railway road and turn right onto Mt Clinton Road, or follow until you’re almost at the Highland Center, and turn left onto Mt Clinton Road. You’re going to a point nearly at the middle, so neither one will save you from your full allotment of frost heaves and bumpy road. At the parking area, the trailhead is on the right. The kiosk is in the woods, so it won’t be apparent initially.

If you’re planning on a winter ascent, know that Mt Clinton Road isn’t officially maintained for winter travel, and there’s a gate at the Highland Center end.

Edmands Path is blue-blazed. Crawford Path is the AT, so any signage will mention that in parenthesis, and blazes will be 2×6 inch vertical white stripes. Realistically, you don’t need blazes to find the trail, although on the ridge, the signs will be key to staying on the preferred route. Bring a map, because there are quite a few trails that join up with Crawford Path, all along its length. 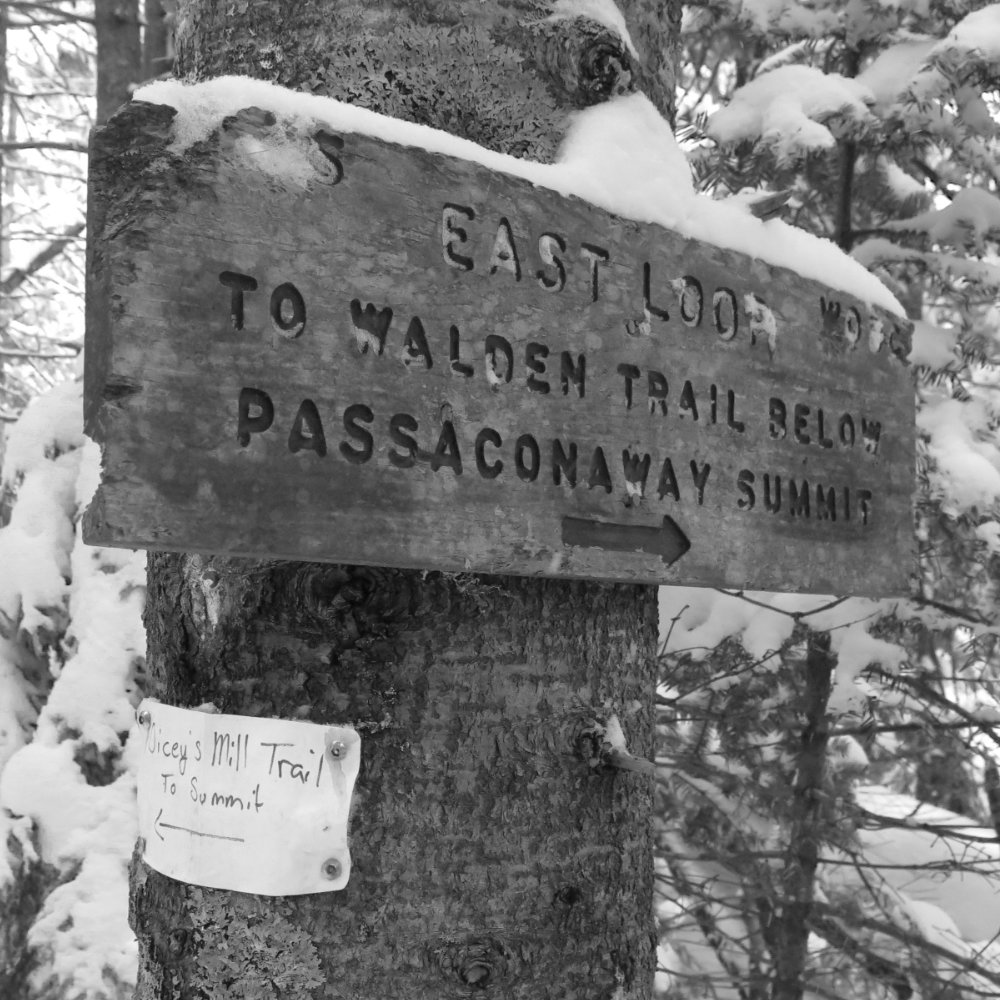 4 thoughts on “Trip Report: Hiking Ike, and then Linking to Lakes”