The kiddo tested it, and his mom approved!

For those using the Gaia app, there’s a link to this hike’s map at the bottom of this post.

This was probably the most unusual hike I’ve done in the past few years. Maybe ever. For what might have been the first time, not only did I have a companion (not unheard of) but a very intrepid half-pint came along with said companion. I might have met my match, because at many times, that little dynamo zoomed up the trail, completely unhindered by gravity. Some say life is wasted on youth, but this kiddo defied that ideal with reckless abandon. Never let it be said that a three year old can’t race up a mountain like a bottle rocket.

Setting that aside for the moment. I’d looked at the M-S Greenway at various times. And truth be told, it certainly caught my eye. I mean, if nothing else, sooner or later, you ski Sunapee, right? But more than that, the Greenway has shelters along its length for camping. Wapack disallows any such indulgence. If the Granite State has an answer to Vermont’s Long Trail, part of it must lie on the Greenway, even if there’s that pesky gap between Sunapee-ish and the trails to the north. But that’s an idea for another post.

We’re still dealing with stay-at-home orders, so in the spirit of that, I’ve continued looking for nearer-to-home places off the beaten path to recreate. (A vague definition-by-elimination: rejecting the Whites, Pawtuckaway, Grand Monadnock, and most things around the big lakes.) Hopefully, this stimulates everyone to look beyond the well known joints. If nothing else, I myself am steering clear of other people’s ick. I’ve been having fun with this little problem, and expect to continue having fun with it.

So to that end, the entry for Lovewell Mountain, in any of my guide books, failed to include the words “popular” in any description and so caught my eye. I have no idea why it’s not higher on any list. Not the least, see my observation above, where I took note of a three year old dynamo who had a blast today. No mud puddle went unexamined. We poked around at moss, lichen, and other stuff on the forest floor. A moose track was found and pondered over. Every variation of “what, where, why, how” came up and was discussed. In short, those who neglect this tidy little hike are missing out, because there’s a lot to see, even without any eye-popping panoramas that stretch for miles. And grown-ups aren’t left out. We spied a cellar hole, rapidly being consumed by the forest, and stone walls too numerous to count. All signs of the people who once lived on and worked this land, years ago, quietly being reclaimed.

We started out having parked fairly near Halfmoon Pond Road. We’d tried the logging road for a short bit, but it didn’t take long to realize it wasn’t a smart idea, with just too many big rocks and whatever else gumming things up. No worries. The MSG trail blazes run down the road — it’s a formal part of the Greenway in this stretch. After a bit, a hard left at the sign led us up the trail proper. And magic began in earnest.

It had been a late start, both because of usual household stuff (I wanted a short nap after getting off work this morning) and the directions to the trailhead being a bit oblique. But that was fine. There was enough sunlight to hike safely, end to end. And this isn’t a challenging trail by any measure. But as we ascended, there was a lot to see.

Obviously, this is mud season, and there was plenty. In the first half, notably on the dirt road, there were quite a few puddles wide enough to require a small amount of looking around before hopping across rocks, or (gently) taking to the sides. They gradually gave way to drier trail conditions as we ascended. Much of the bottom half wasn’t particularly flat, but it wasn’t a hard uphill, either. But after that first mile or so, an upward pitch became quite obvious, and before long after that, we were earnestly heading up.

To the mid-point, the trail was more of an old logging road. There was a mix of trees, both deciduous and evergreen. Around halfway, when things pitched upward more strenuously (although ‘strenuous’ is not a word to describe this hike) the trail necked down to a more normal footpath width. Deciduous trees gave way to many more conifers, and there were many more rocks and ledges underfoot. Occasional patches of ice and snow here and there showed winter hasn’t released its grip just yet, though its coming. Cairns were mixed in with blazes, although never once, while we were on trail, was the way forward in doubt. Bring a map and compass, of course, but they’ll probably stay in your pocket.

At last, we passed a small wooden sign for the spring located near the summit. Just a few hundred feet left and we were on top. A very large cairn marked the top, and there was a small peep-hole through the trees with a very long view beyond. I’m not positive, but I’m pretty sure those were the mountains of the Wapack range out in the distance. Turning back, we enjoyed an easy walk back to the car.

Lovewell has what I thought to be a perfect blend of altitude and distance for an easy afternoon hike. Without a doubt, I got my daily exercise in, but there was a lot of room for a very late start, and yet we got off the mountain before dinner. And yet, with its location so near Sunapee, it offers option to expand the day’s goals to a much longer outing — even a long weekend. I’ll be back for more.

Nuts and Bolts: Lovewell can be a bit hard to find. It took us a small amount of driving and playing the “is this it?” game. Probably your best bet is to follow Route 31 into Washington, and once at the General Store, head east for less than a quarter mile. At the fork, where Halfmoon Pond Road breaks off to the left, follow that until it tees into an intersection with Mill Road. Turn left, continuing on Halfmoon Pond road. We parked where it made no more sense to try going forward, near a gate across a driveway. Be a good ambassador, and don’t block the road wherever you do park. If you have a 4×4 with a lift kit… just don’t be “that guy.” Follow good OHRV practices.

Note that the road itself is part of the Greenway, and if you kept your eyes peeled, you no-doubt saw the white blazes on telegraph poles along the way. Follow them north-ish, and you’ll come to a large wooden sign on the left, indicating you’re at the hiking part of the trail — the trailhead, if it can be called that. You’re on a segment of the Greenway the whole time, so don’t expect a formalized trailhead signboard, complete with map and LNT reminders, like you’ll find most other places.

Blazes are white, 2 inches by 6 — similar to AT blazes in the Whites — and there’s a good amount of them. Trail is easy to follow and well maintained. 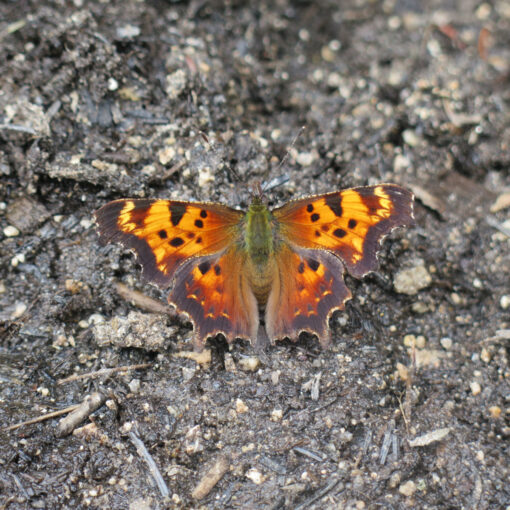 A hike up Cannon. Can a butterfly’s wings defeat a crazy steep trail? What about two? 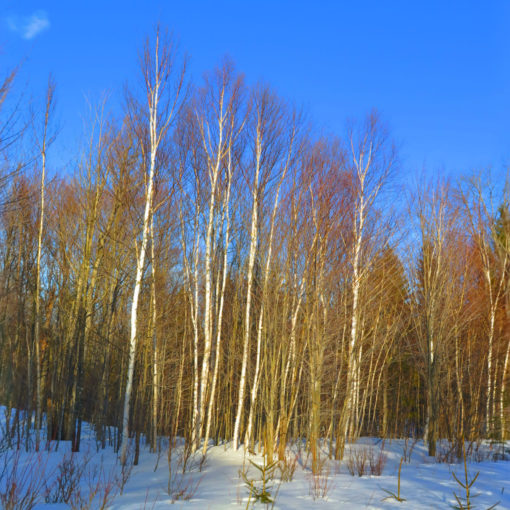