Unbridled sunshine throughout the day with a light haze.

In retrospect, I’m glad I did this hike. Not that there was any question I would, but this on in particular had a lot of gifts. In contrast to my typical way of blogging trips — that of writing, then posting a lot of photos after — I’m going to put the photos out and narrate them more than normal. The camera came out a lot today, and the pictures took themselves, without question. I really hope people get out and hike this mountain, because it was that fun.

Dartmouth Outing Club has a fantastic write-up, including very detailed mileage of various landmarks. If you’re into that level of detail, I recommend it.

Early on, the trail presented itself as fairly easy. This isn’t a hard mountain. It’s the last mountain on the AT before Moosilauke (assuming a northbound hike). But setting aside the difficulty of hiking up to Maine from Georgia, this one’s not hard at all. The opening mile or two were muddy, but it’s springtime. Overall, the trail wasn’t technical. A few rocks to hop on and over, but not difficult. 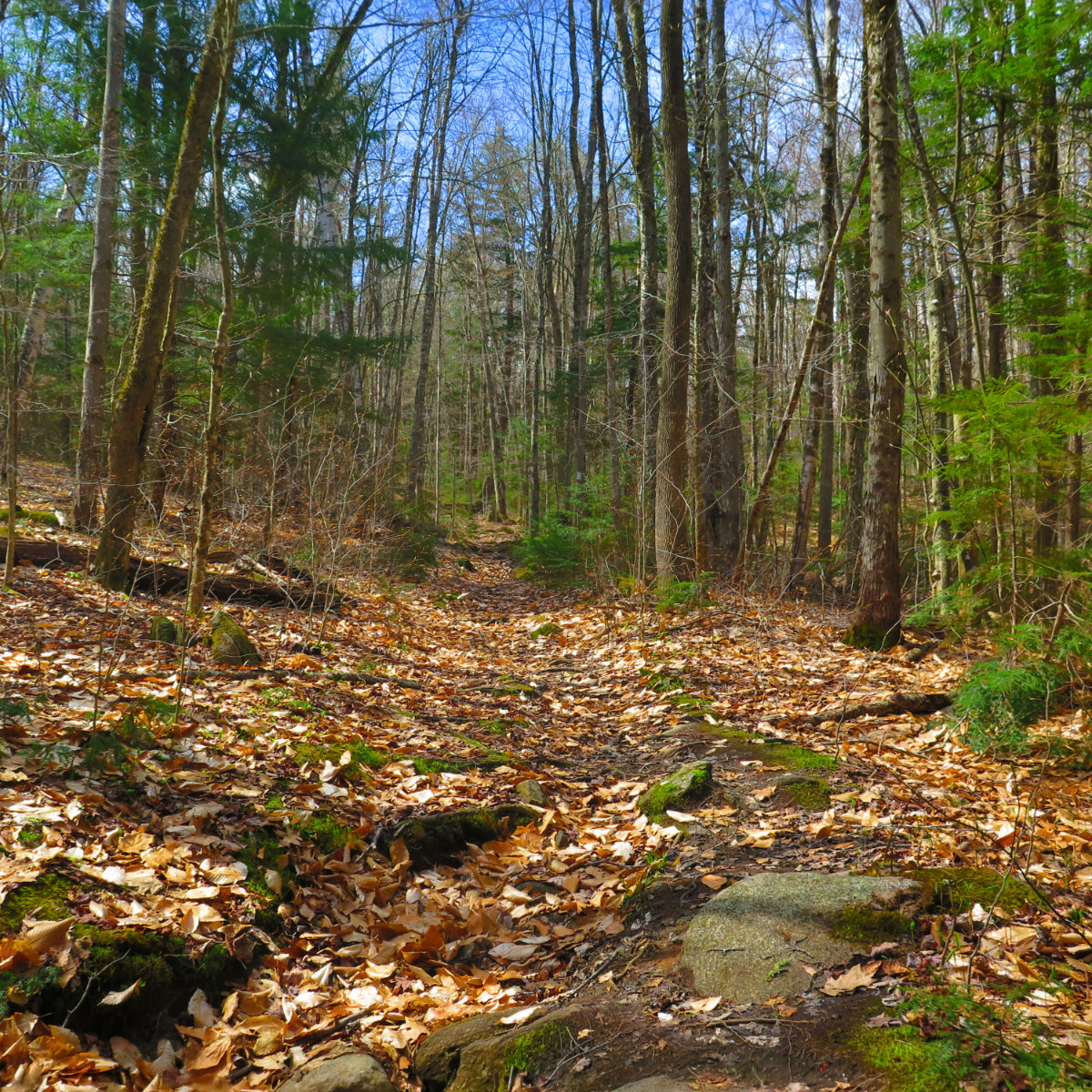 The trail is actively shedding water. Brooks weren’t flooded, but probably more swollen than not. Nothing was that hard to cross, though a couple crossings were “thought provoking.” 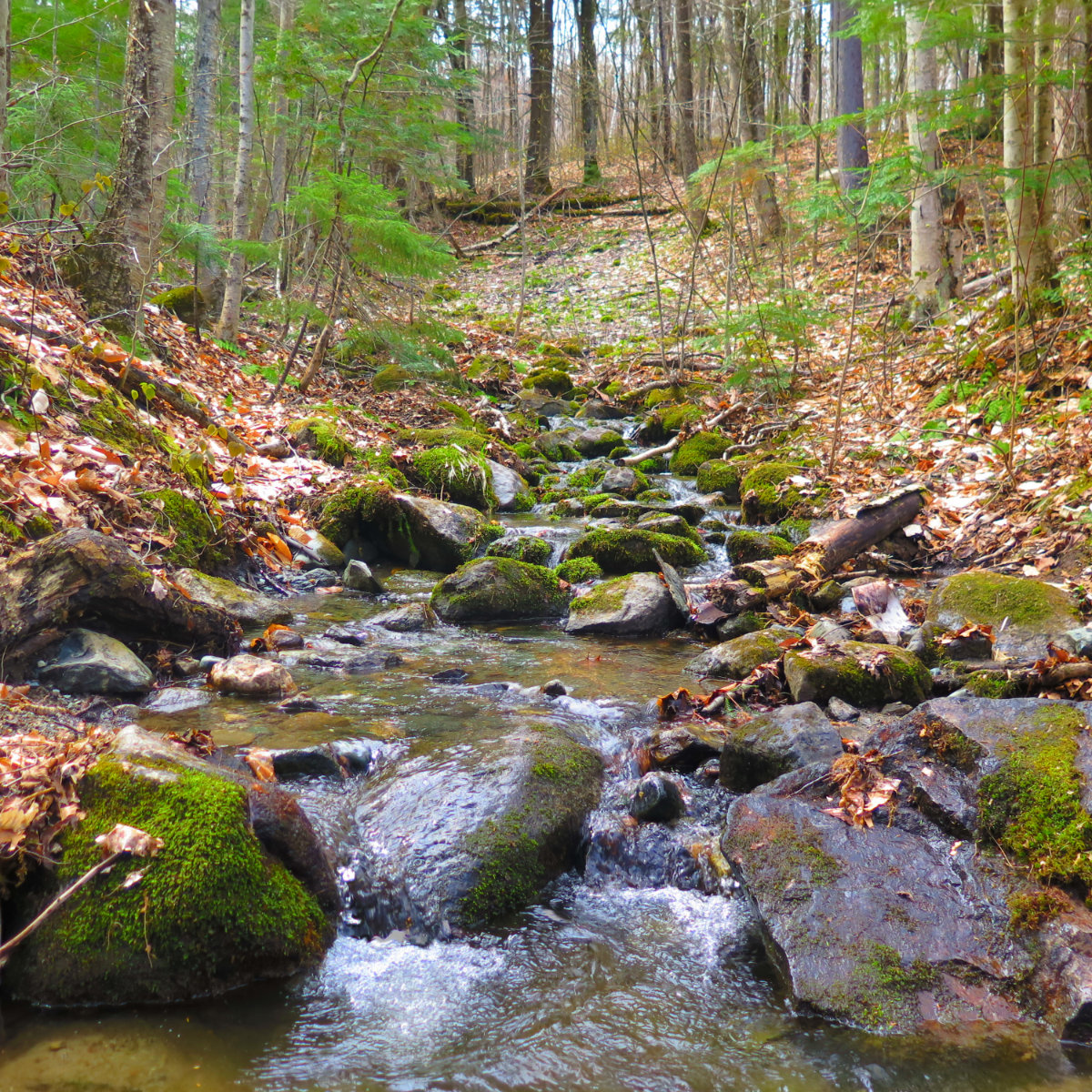 And, of course, the small ones were picturesque. And calming. 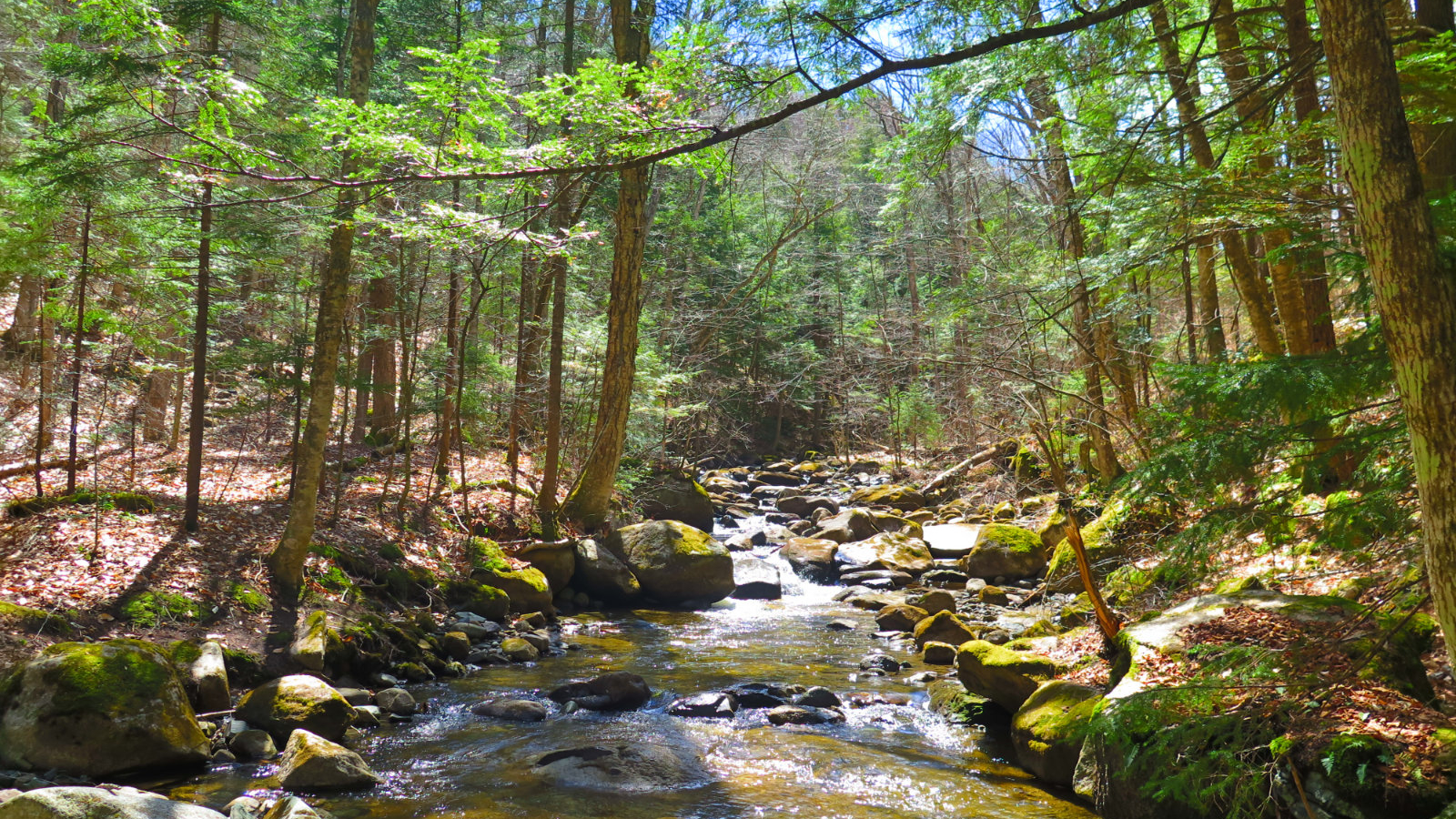 More calm. Wow, that was the defining thing about today: calm. 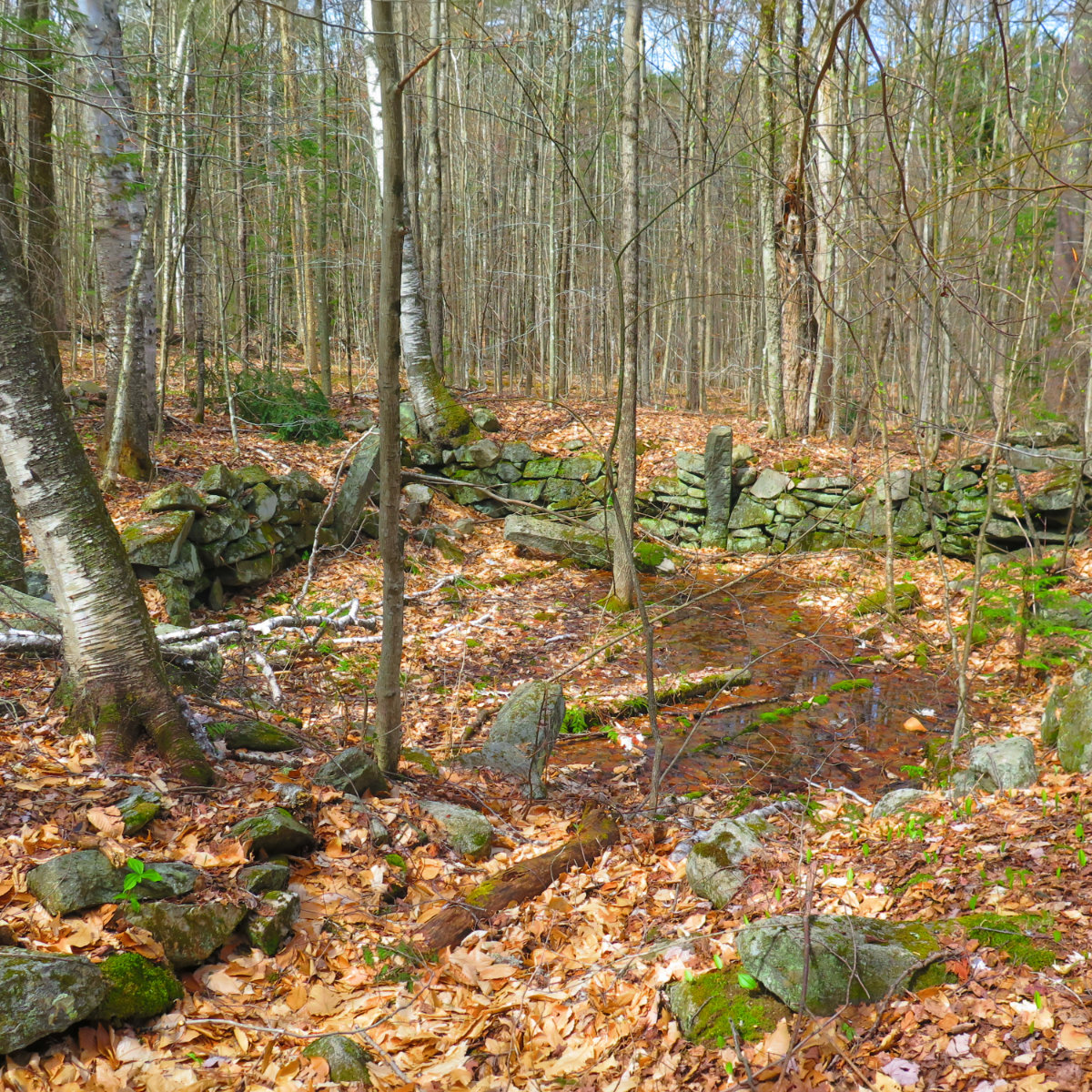 This is a cellar hole, perhaps a homestead of one S. Chase. Apparently, the road came right up to the home. And time and tide has reversed that incursion. As happens. 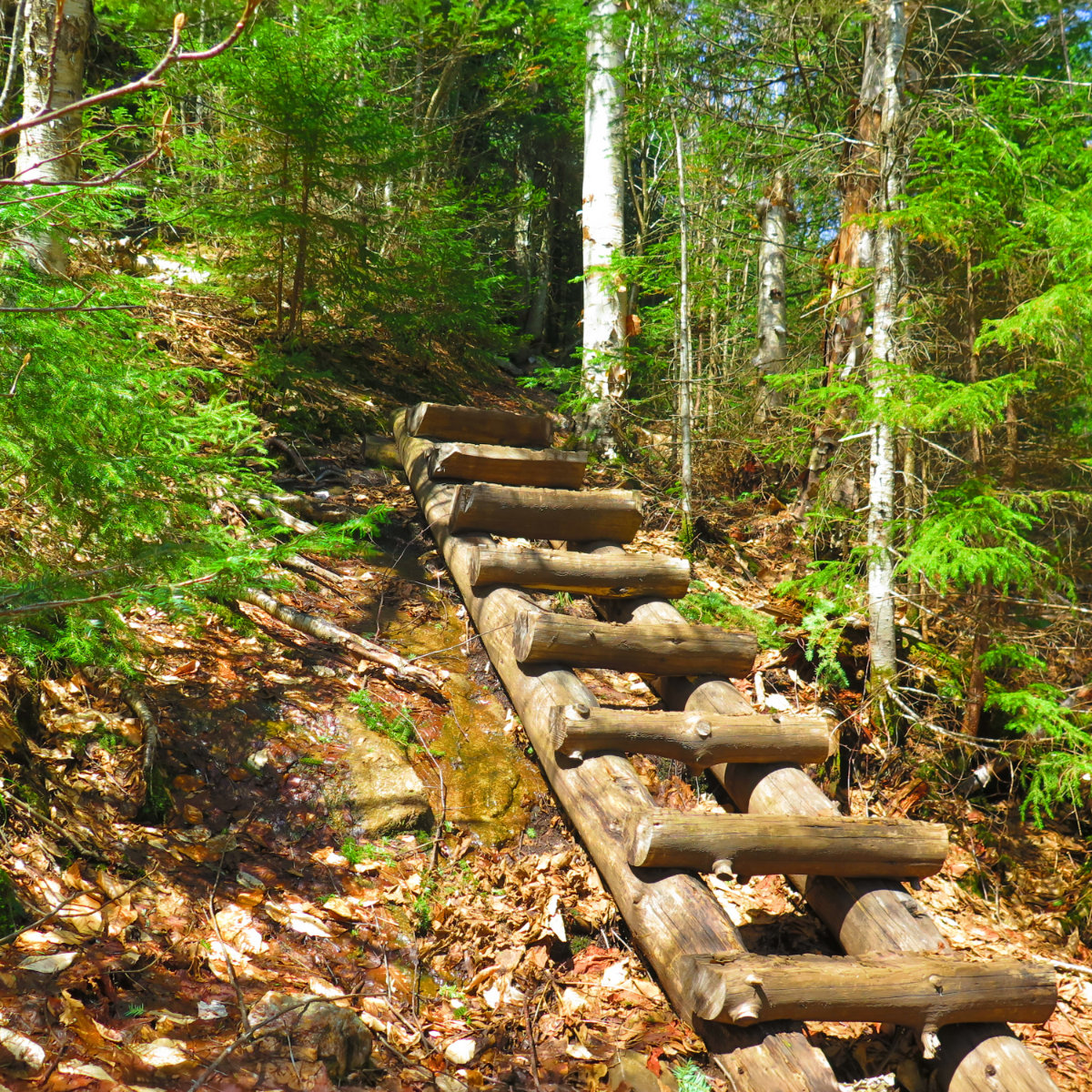 This was the steepest part of the trail. The ladder was spanning a slab that likely was slippery. Water was everywhere. It’s certainly mud season. 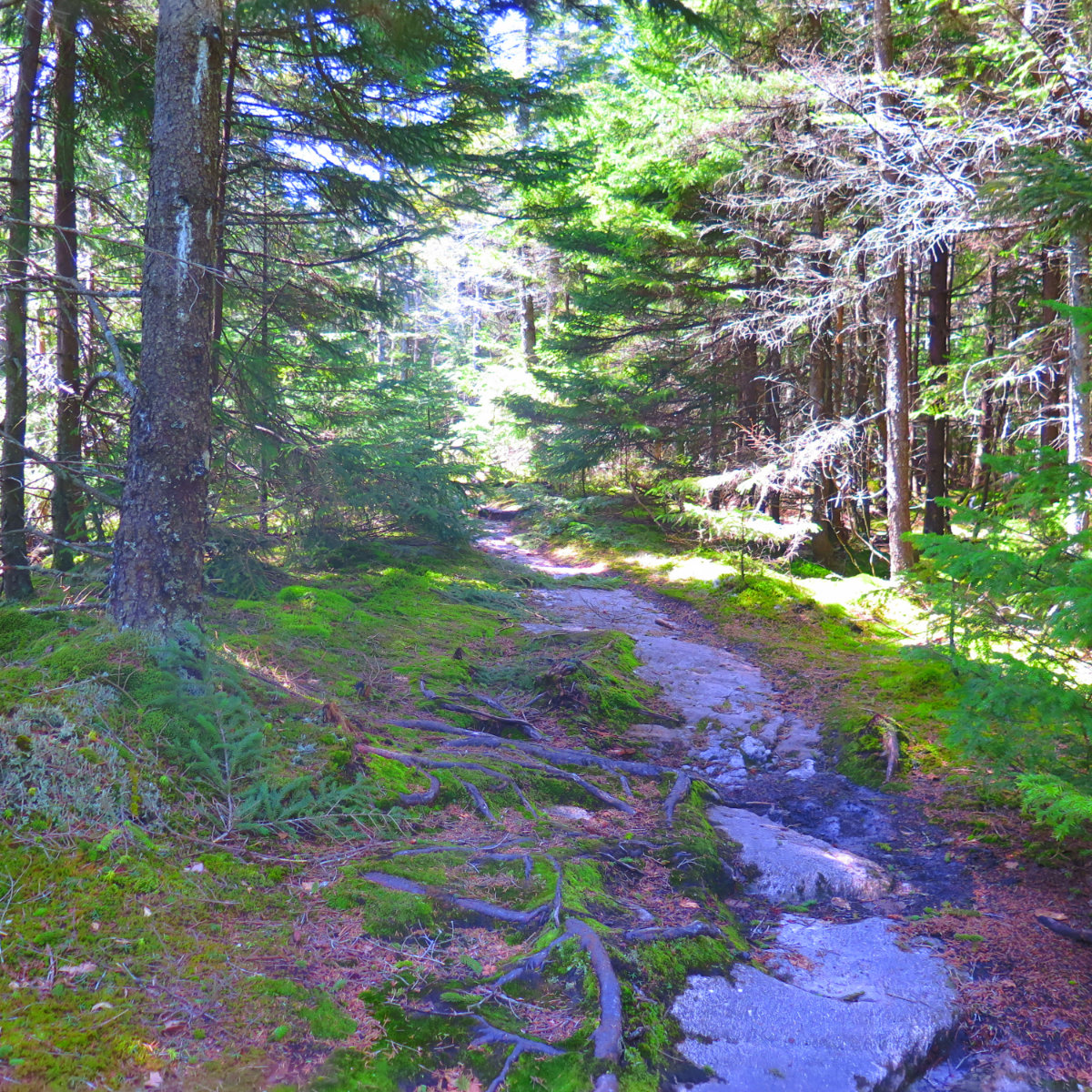 This is emblematic of one of the nicer parts of the trail. A lot was muddy, but nothing was impassable. And there was a lot of moss, softening the curves, blunting the edges. Serene forest bathing. 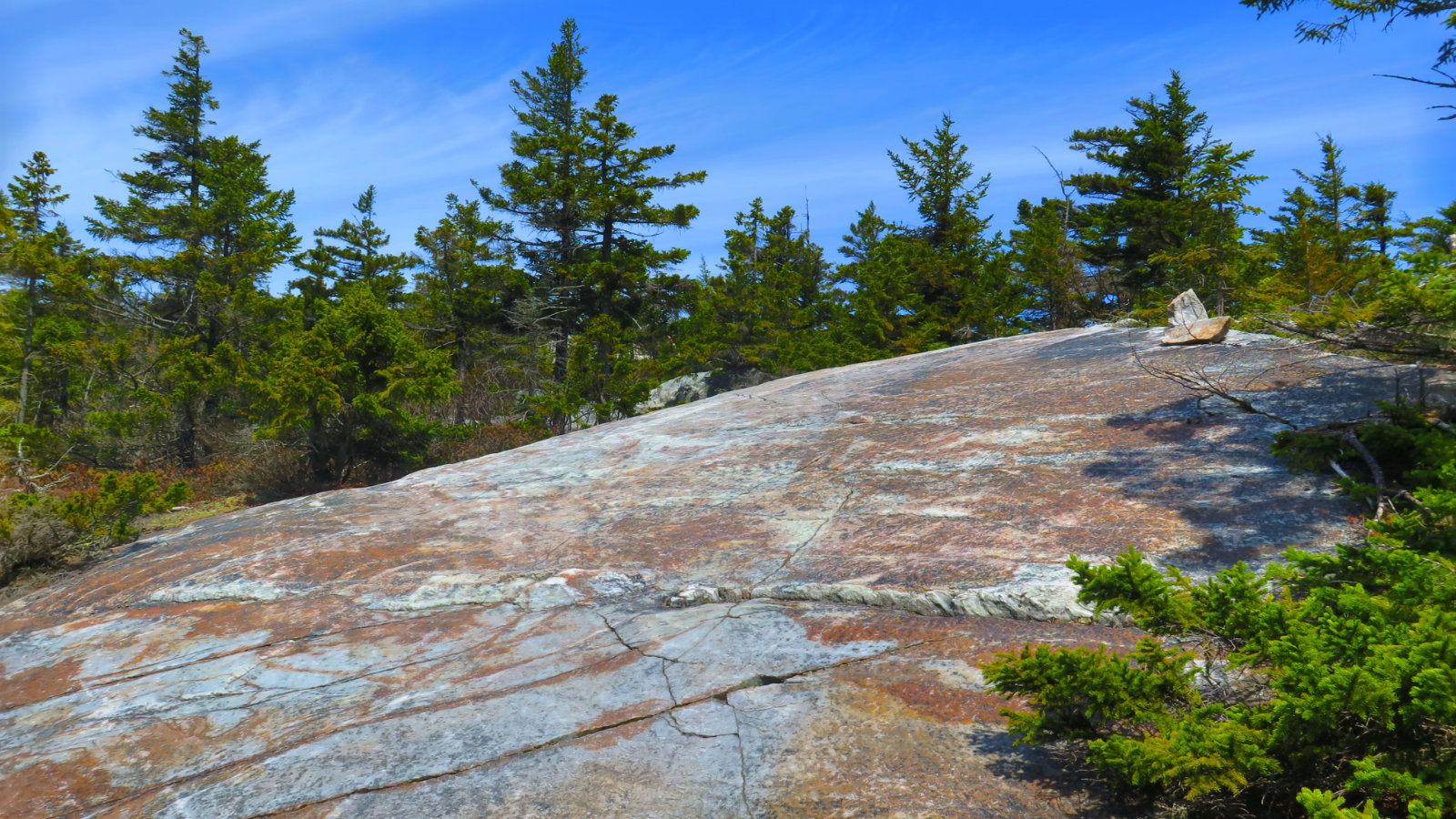 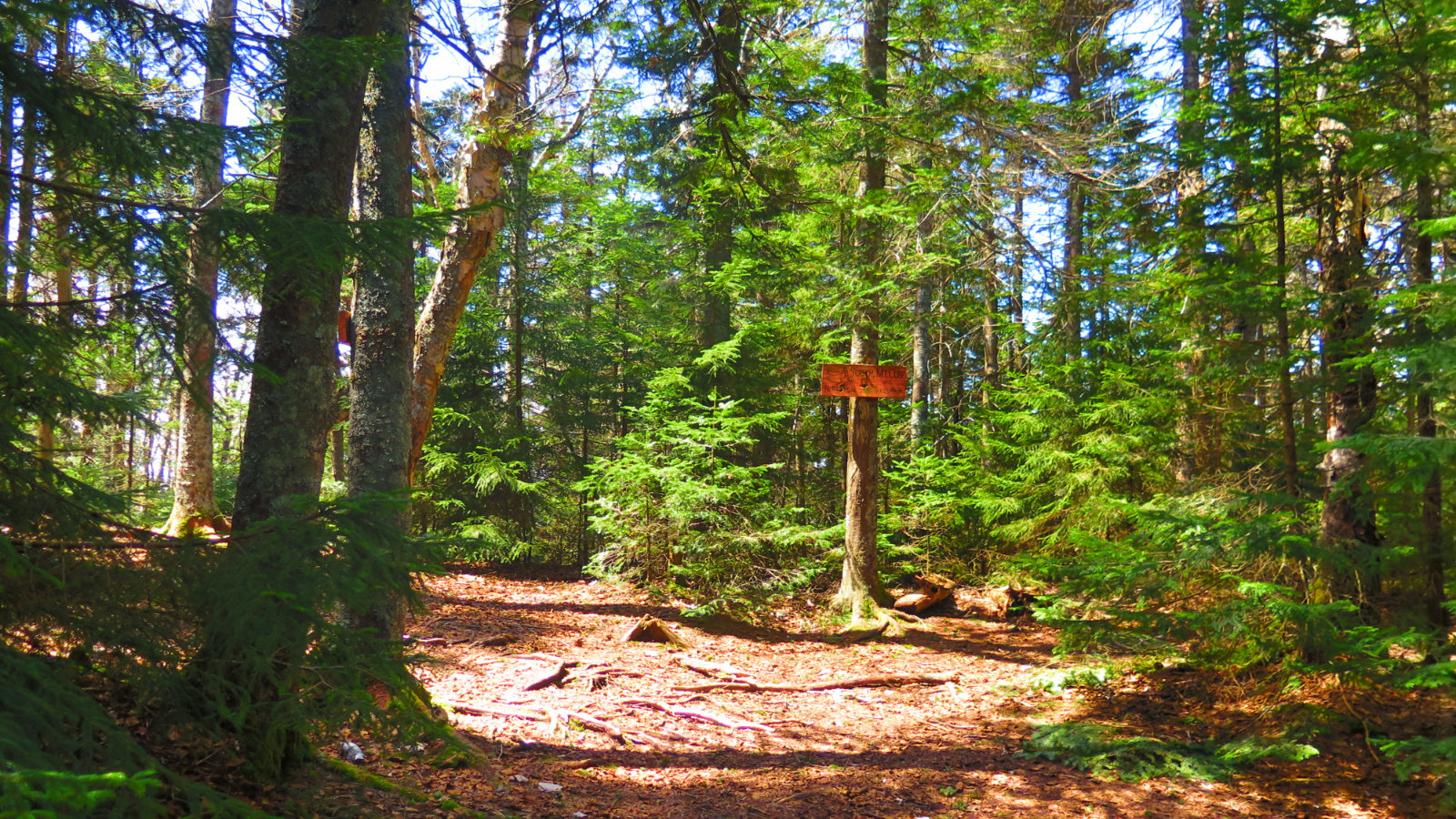 Near the summit is a sign. To the right is a viewpoint to the north. To the left is the Mt Cube summit. Walking out to the north viewpoint takes about 10 minutes and a little bit of up-and-down. But the views are epic. 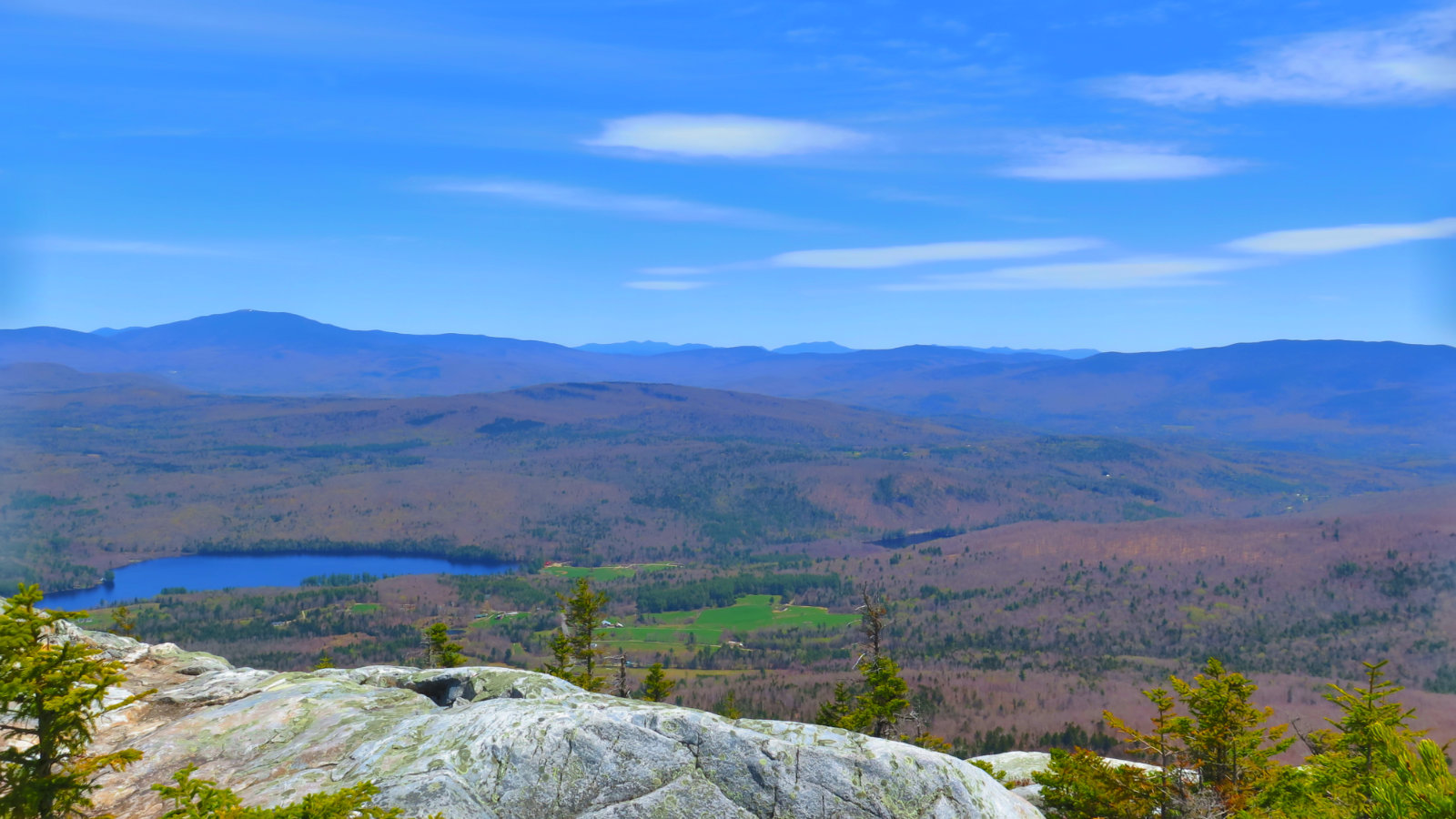 Moosilauke, Washington (with a spyglass) and then Carrigain, Whiteface, Passaconaway. Also, North Kinsman. In Vermont, all the 4,000 footers except Mansfield were visible. Probably a three state day. 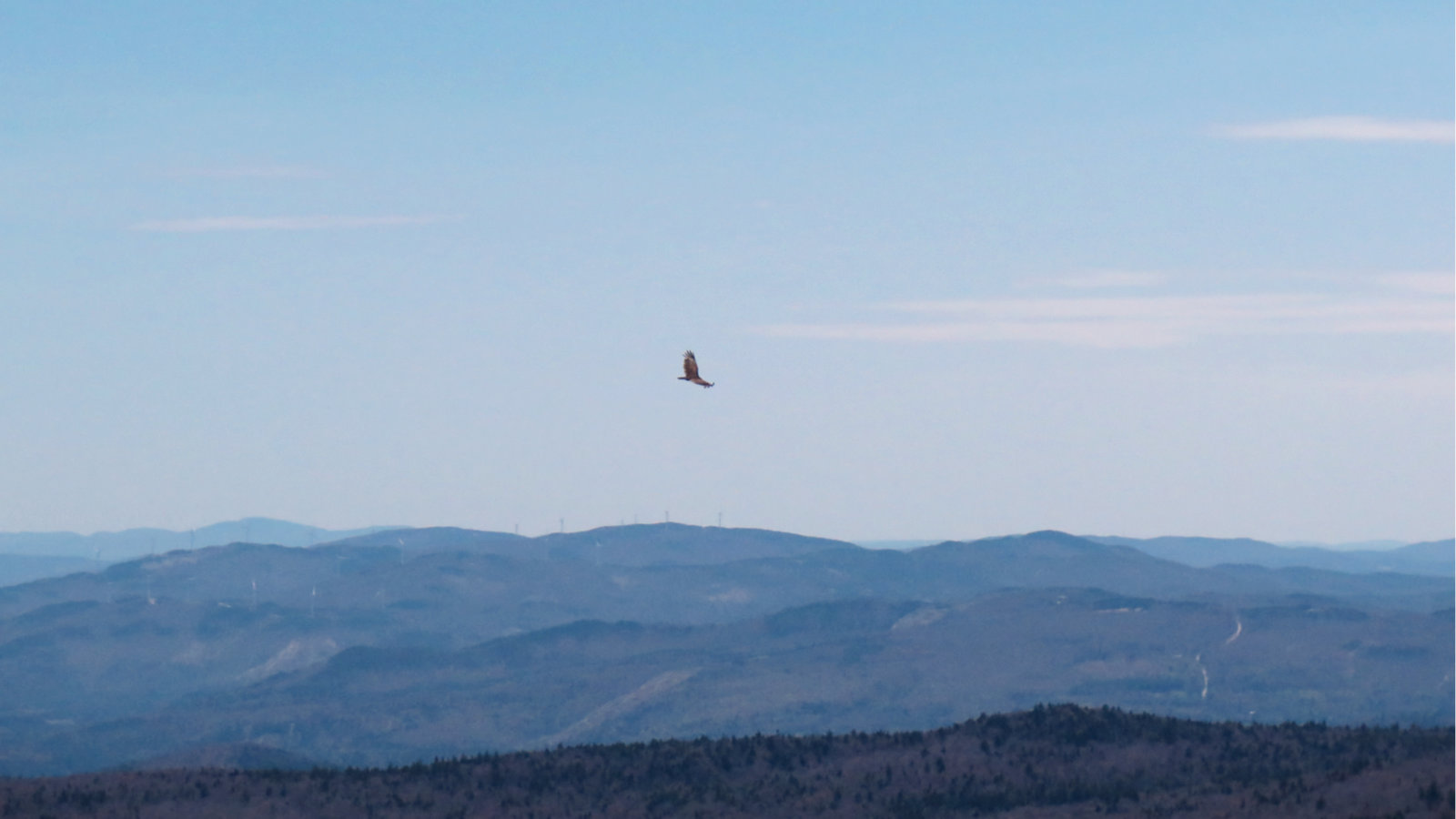 One of four raptors mindlessly soaring around. Plymouth and its wind turbines in the background. 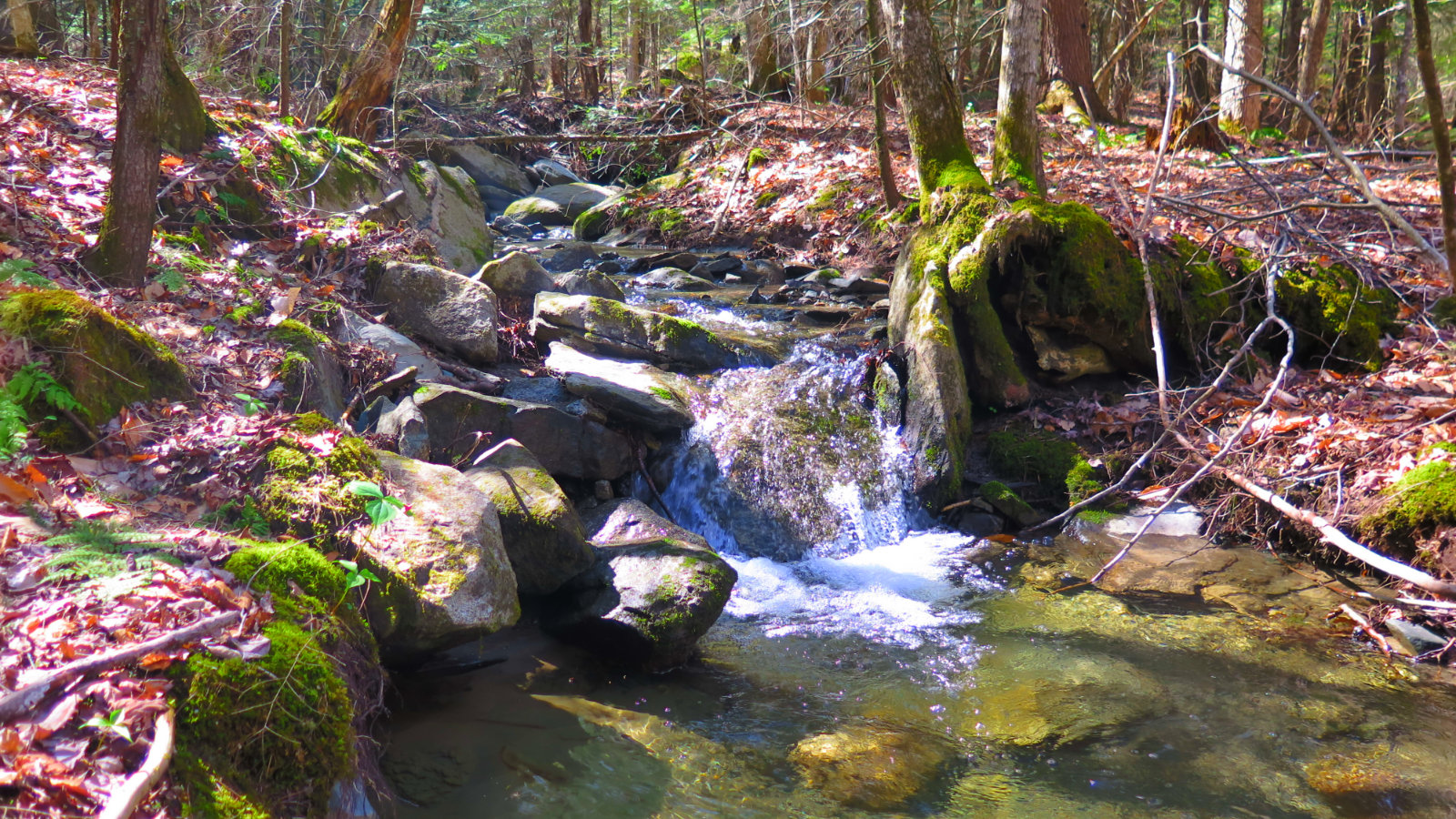 On the way back, another waterfall in a brook. As the sun crossed the sky, some of them got better light and made better photos. 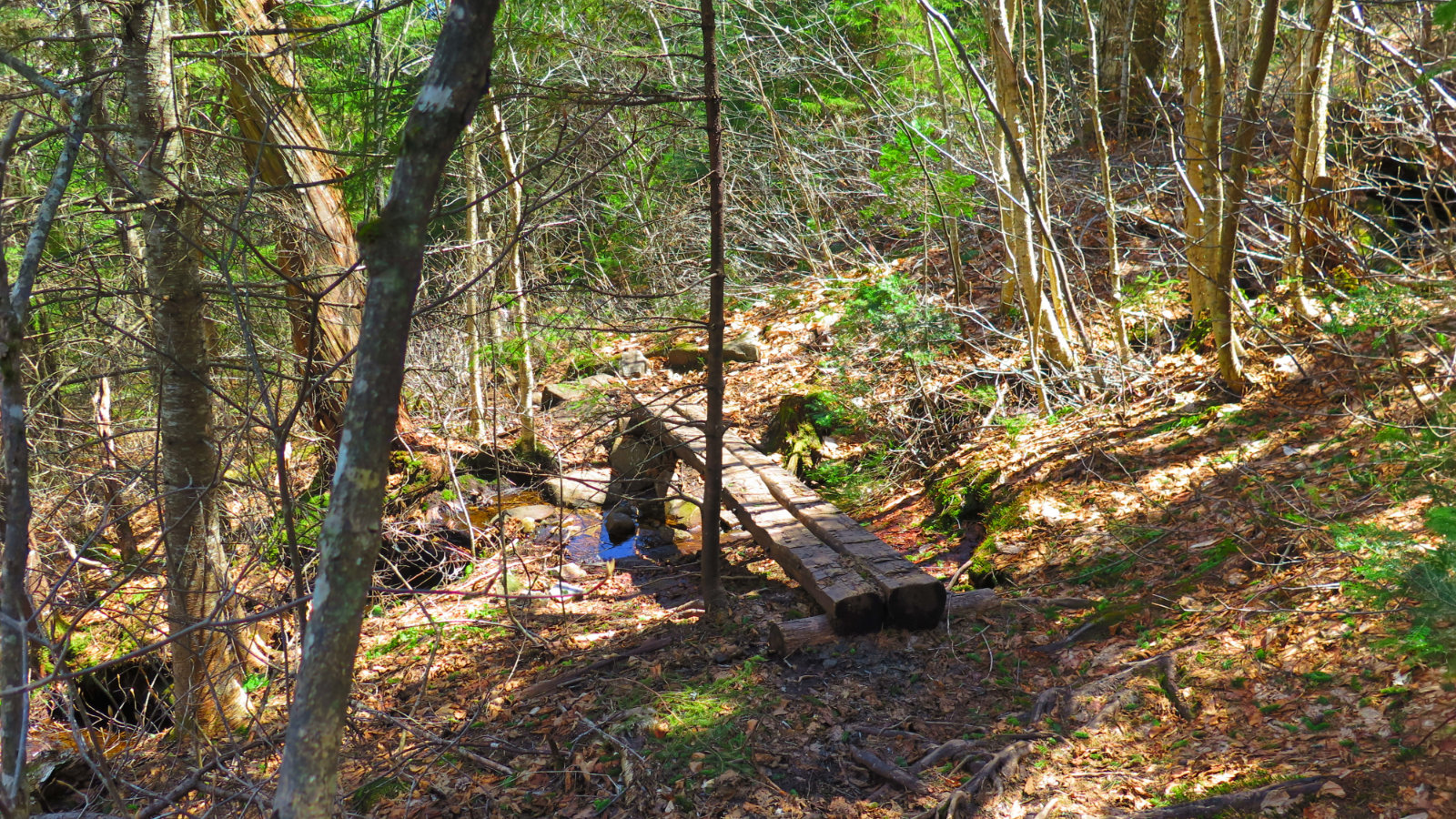 A puncheon bridge. Not too many of these, though with all the mud, some more puncheon or some stepping stones would have been nice. There didn’t seem to be much trail erosion, but try to step lightly. 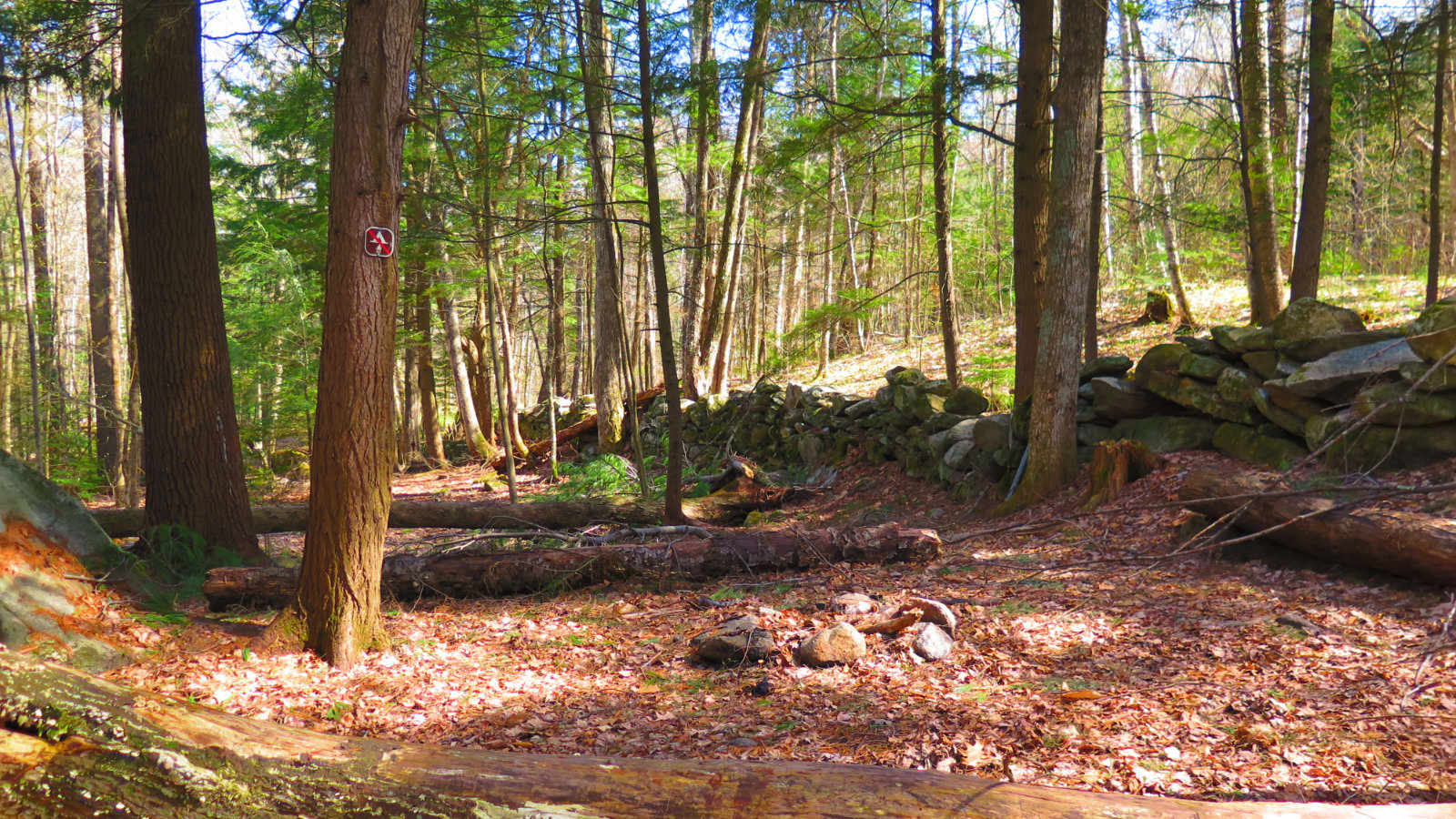 Not far from the trailhead, a stone wall speaking to the history of these parts. 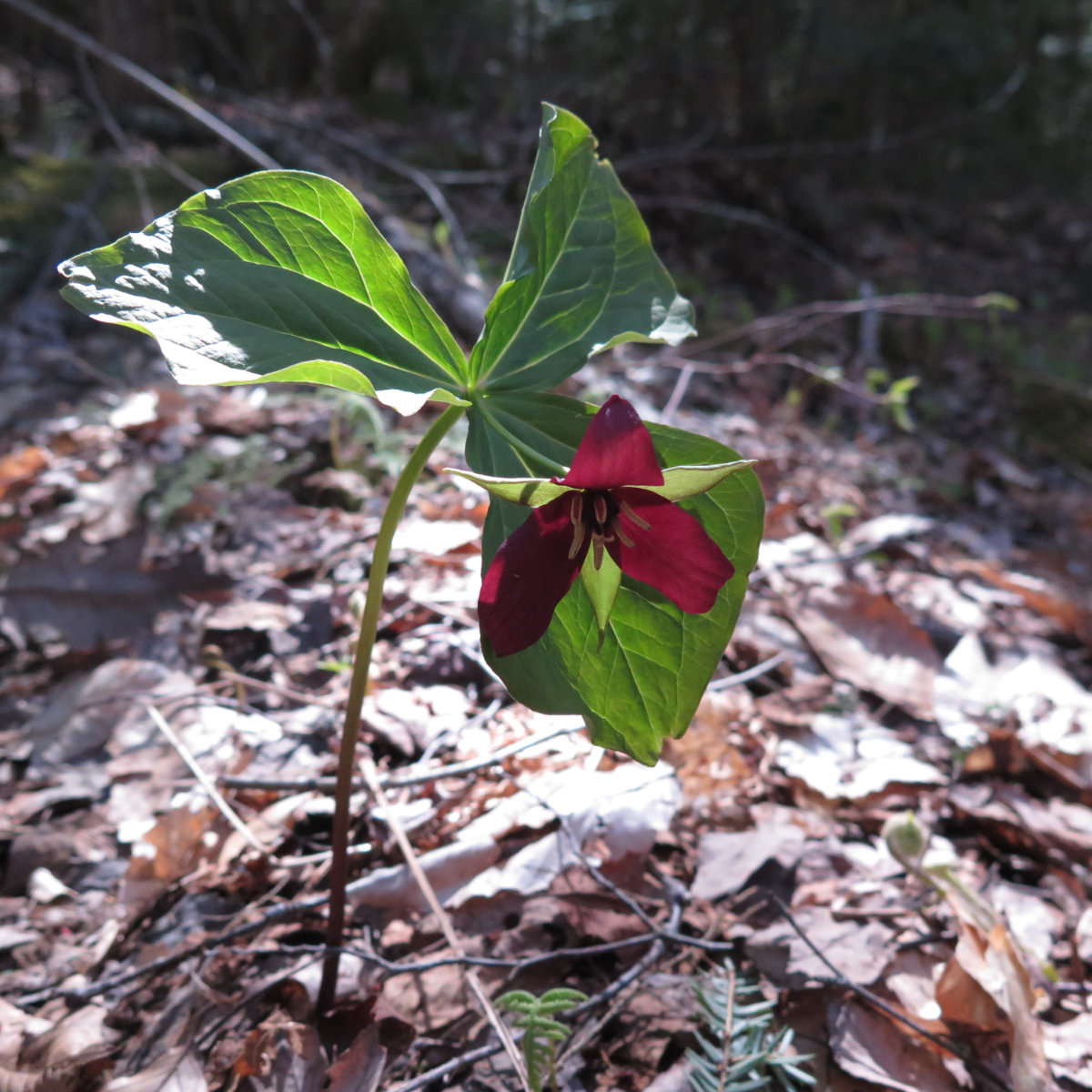 Red trillium, uttering its color. We saw several that were still mostly closed earlier in the day. I’m jazzed they were open when we saw them on the way back. 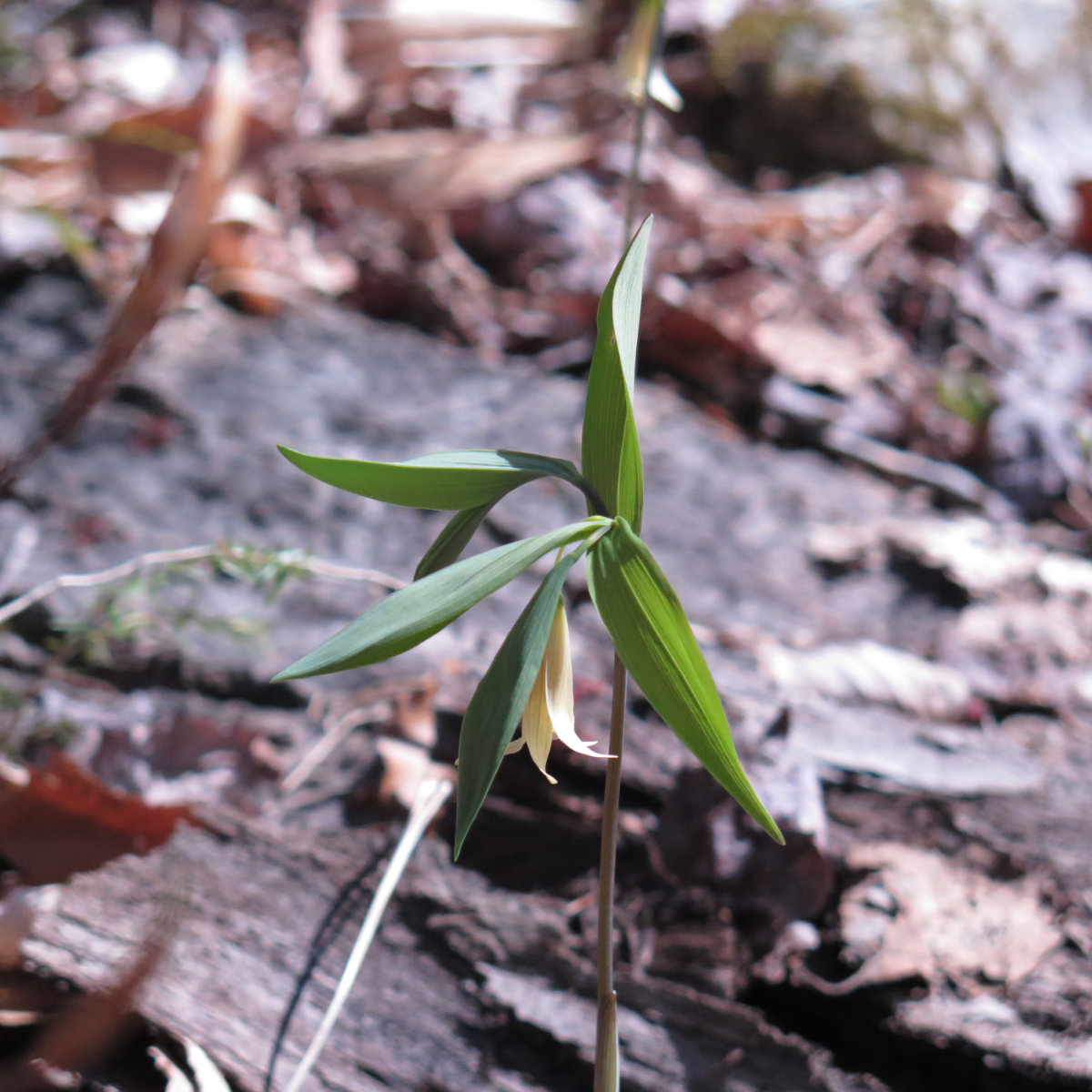 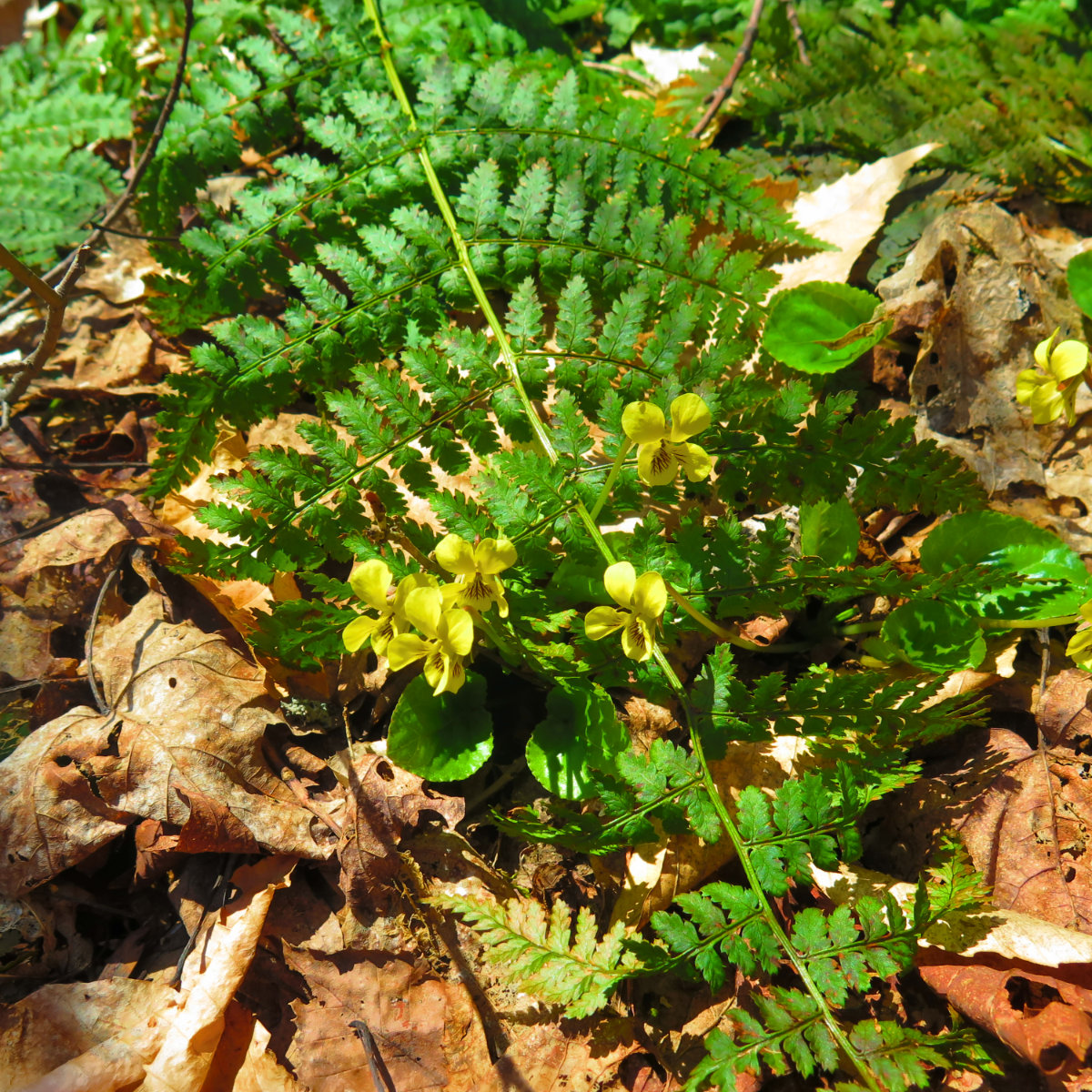 Not sure what these guys are. Going to keep looking around. I feel like I’ve seen these before and perhaps even blogged about them. Edit: Eastern Roundleaf Yellow Violets.

Cube is on the Appalachian Trail. And though I thought it a little early, we did indeed meet up with an AT hiker. “Just Don”, who hails from Virginia, set out from Springer about 10 years ago, and hopes to make it to Katahdin by next year. We swapped some info about the trail, and parted ways. Nice guy. Don, may the wind be ever at your back, and the sun fall warmly on your face.

This is one of those mountains that isn’t famous for being on the 48 list, it’s not particularly high, and its views, at least today, weren’t comparable to those of, say, Guyot, Adams, or Franconia Ridge. But it’s a fun mountain. It doesn’t have a panorama of 20 four-thousand-footers, but its views are stellar nonetheless. I kept making mental notes of things to look for when I pass through on my AT hike. And of things I want to see when I come back again, because it was just that much fun. 10/10, would do again.

Nuts and Bolts: The trailhead is on Route 25A in Orford, NH. From 93, take the Tenney Mountain Highway (Route 25) into Wentworth, and turn left onto Route 25A. About 4 1/2 miles later, you’ll see a large sign for Camp Moosilauke on the right, as well as a small brown sign marking the Appalachian Trail. The Mt Cube trailhead is on the left, marked by a typical brown wooden sign. 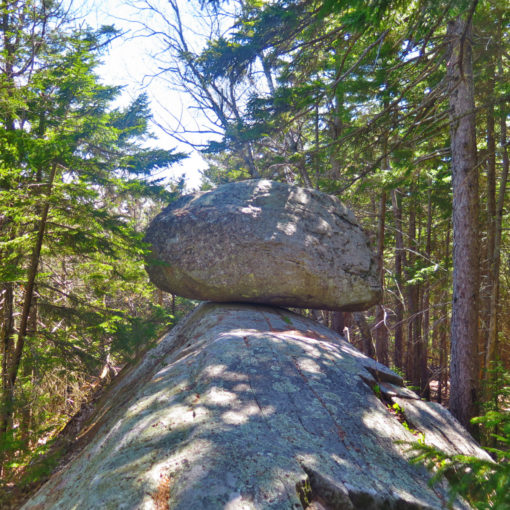