Skip to content
Home » Not so isolated on Mt Isolation

Temps in the 60s from trailhead to summit. Winds were negligible in the trees, 8-10 MPH with gusts to 15-20 MPH on the summit. Partly sunny to start, becoming cloudy as the day progressed. Mainly clear views with moderate haze.

It’s officially autumn. Believe it or not, for all the fun of summer, with long, languid afternoons, and a decided lack of a need for warm clothing, I was thinking about autumn a lot starting around mid-August. It’s not that I didn’t like the fairer months, but I like the turning of the leaves, too. When I was out of sorts at the end of my 67, I hiked Liberty and Flume on what became a postcard-perfect October afternoon. I still have fond memories from that day, and for better or for worse, they bias my thinking. Mea culpa.

I’ve been slowly coming around in my thinking about the Rocky Branch trail, especially with my most recent hike being pretty successful. And so, with the longest days on this side of the season, I figured starting out with one of the longer hikes on my list would be a smart idea. And then I checked New England Trail Conditions, just to see how things were.

And that’s when my mind changed, on the spot.

It was something that, frankly, I should have thought of first. But someone had posted about having hiked up Davis Path. And duh, I’m redlining. Davis Path is most emphatically on that list. Some quick research showed it was well within the realm of a day hike as long as I got out early. OK, I can do that.

Getting out of my car before 0800 was a bit of a shock. It was still a bit chilly, but warming up steadily. I got cracking, heading out on old abandoned railbeds. The Saco Valley railroad plied its way up the Dry River valley back in the day, and the ground still retains its secrets. I made good headway up a very smooth trail with the Dry River keeping me company.

That’s not to say it was a total cakewalk. Oh no. There are rocks and roots all over. That said, I’ll characterize most of the trail as being a fairly easy way up. I wouldn’t want this to be the first of my 4,000 footers, but if it were the twentieth, I’d probably do OK. The railbed carried on up to just about the junction with the Isolation trail if you knew where to look. It was rougher going between Mt Clinton trail and Isolation trail, but not a terrible lot rougher. I wouldn’t in any way call this a strenuous route up the mountain. Long, absolutely. But not strenuous.

However, it’s a valley, right? The trail pretty much cuts across the side hill as it goes. In some places, the trail is pretty thin. In others, you’re on the full width of the railroad. And with some regularity, there were games of dodgeball, where a tree was caught up in a landslide, or a boulder rolled down onto the trail, or what-have-you. In those cases, the trail would suddenly pitch upward about 20 feet, continue across the top of the obstacle, before descending the other side. This little feature of the trail ate up time wholesale. Ouch!

On that… looking back at the history of the valley, the literal shifting of sands was almost precisely what kept logging interests in fits. That railbed? A lot of it was trestles, precariously perched. The lease lasted for 15 years, but the actual logging was rushed through in 5. Maintenance of way was nearly all-consuming in terms of time and treasure, meaning profits were meager. In short, the valley did not suffer the folly of a railroad gladly. Within a few short years after the end of operations, the trestles were summarily washed away by the river. Hiking today, I could see exactly why the whole idea’s foundation was nothing more than the shakiest house of cards. Even the existence of a hiking trail seems a conceit only barely tolerated by the mountain.

It took awhile, but I passed the Mt Clinton trail junction, then found myself on Isolation West, and that’s where the real ascent began. On the way up, similar to hiking the mountain via Glen Boulder trail, you’ve got to hike up, to a couple hundred feet over Isolation’s summit. Not as frustrating as hiking up Boott Spur, but the point wasn’t lost that I had to climb higher than today’s summit objective. Isolation trail leaves its brook about halfway up, and after hearing babbling brook all day, I was a little upset not to have it as my soundtrack. But there it is.

On the summit at last, after the morning and a couple hours of the afternoon spent picking my way over, around, and across obstacles in the trail of all make and sundry. The view was wide, but disappointing. Heavy, black clouds had rolled in, and there was substantial haze. Suffice it to say I’ve seen better. With not much reason to linger, I grabbed my summit selfie and turned for home. I made more of a dash on the way down, not the least, but the sun was not sticking around for extra innings. Picking my way back over those obstacles remained time consuming, but at least I wasn’t trying to find my route in all the places where things got weird.

Today’s was a sublime experience. The wilderness area started almost at the trailhead — I crossed the boundary after half a mile. But rather than be the austere route of, say, North Tripyramid slide, today’s outing was pretty straightforward. There’s been some recent trail work that’s really cleaned things up a lot. There were small cairns just about everywhere. Occasionally, I’d have to backtrack and figure out the route due to a slide, but it really wasn’t that bad.

I’m debating whether it took more time than coming up the east side, but one thing is for sure, my feet stayed dry, and water crossings were, for the most part, limited to seeps and drainages — one-hop affairs at the most. There’s no way you can say things are that nice on the other side of the mountain. The weird thing was in how the mountain really didn’t live up to its name. I probably saw 20-ish people over the course of the day. Indeed, there was no leg of the journey where I didn’t bump into someone. But that’s OK. The trail was a lot of fun, and there was plenty to go around. I saw some cool things, and I’d like to come back and examine the lower section, to see if I can find more evidence of the old railroad. It’s a long day’s hike, for sure, but it’s got some outsized rewards.

Nuts and Bolts: Take Route 93 up through Franconia Notch, and make your way over to the AMC Highland Center, on Route 302. From there, carry on a couple minutes more. Go past the Willey House, and then about 2 miles later, watch out for the trailhead sign on the left. The kiosk is set a few dozen feet back in the woods.

Blazes are… nonexistent. However, there are small cairns just about everywhere, and every junction is, of course, signed as per normal. And even if there weren’t cairns, right now, the trail is in superb shape, with the footpath dead-obvious almost end-to-end. There was exactly one moment where I lost the trail, and I attribute that to me being lost in thought for a moment. It took a grand total of sixty seconds to figure out the error of my ways and get back on track. (And the entire time, I was going parallel to the trail, offset to the right by about twenty feet.) Almost the entire time, you’ll be either on one side of the river/ Isolation Brook, or the other. Refreshingly, there’s no zig-zagging back and forth as there is on the east side of the mountain.

Up via Wapack, down via Marion Davis. Partly cloudy, temps in the mid-50s. It was a lovely day to be outside. Weather […] 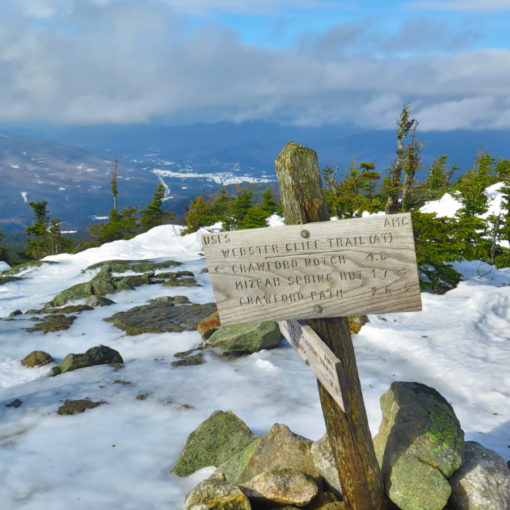 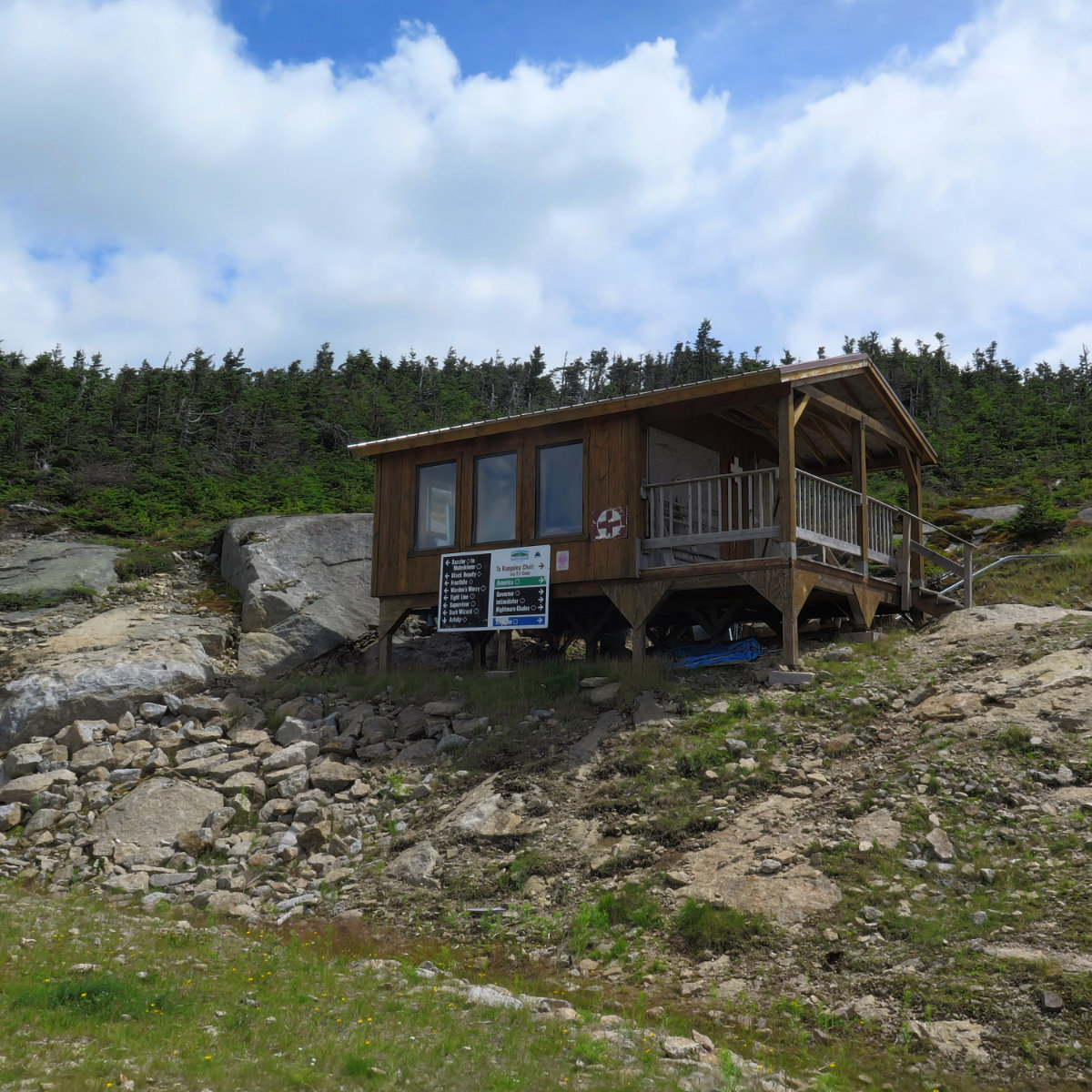 6 thoughts on “Not so isolated on Mt Isolation”