Looking out, looking back, and looking forward.

The 48 taught me what mattered in life. The 67 refined it. Now, I’m looking toward doing the Appalachian Trail, and seeing what that brings.

Starting out on the New Hampshire 4,000 footer list, I never even knew to imagine I’d be who I am now. Back then, a mere eight or nine months ago, I was just going to hike a list I’d known  about for years, and perhaps broaden my horizons. I’d be pushing myself to drive a little further than my local mountain and see if things truly were a little different. More than that? It never occurred to me.

Early on, I’d read up on the various mountains and trails, and then go apply that knowledge. Over time, and with experience, it became less important to know every nuance. I was comfortable just knowing how to find the trailhead, and maybe a little about the basic route. For the most part, route finding took care of itself. A lot of my hikes followed the Appalachian Trail and its many familiar white blazes. For everything else? Well, I learned what an AMC trail should look like, and went with that.

Researching the mountains, and their flora and fauna, I came to find out about the 67 and the Hundred Highest lists. Where the trail sported some well-known white blazes, I came to become adept at spotting the AT hikers, and learned more about that unique experience. Yep, I broadened my horizons, that’s for sure. I never thought I’d ache to set off from Springer Mountain in Georgia on a long walk to Katahdin, but thanks to those hikers, now I do.

In doing the 48, I tried to organize my hikes according to mountain ranges. The Whites are a concentrated glom of mountains, without linearity or other easy categorization, so that’s what I had to go by. I was mostly successful, and it added hugely to my understanding of the land and its biomes. Turning to the 67, I saw the mountains could be organized linearly with ease. I could start in Vermont and go down the Long Trail to where it met the Appalachian Trail, and then jump over to Old Speck in Maine, and go in order along the AT toward Katahdin.

On my first hike of that fateful 48 list, I met some wonderful people on the trail, and that continued as a theme throughout. The weather changed often, some trails were rocky while some were smooth, but the constant was all the wonderful people I met. Those AT hikers really made me want to join them, and even though I kept to day hiking the 67 as I did in the Whites, it gave me a taste of that venerable trail. Before long, I found myself planning things so I could hike on the AT whenever possible. On the trail, as the opportunity arose, I listened intently to their stories. And slowly but inexorably, that trail became a beloved friend.

My first mountain of the 67 was Mt Mansfield — Vermont’s highest peak, and notably, nowhere near the AT. My last was Katahdin’s Baxter Peak — Maine’s highest, and the terminus of the AT. That’s a nice pair of bookends that stand in stark contrast to each other. Vermont was bucolic farmland, Maine was serene isolation. The trail isn’t the same everywhere.

Vermont kicked off with a beautiful day and endless views near the first of summer. I remember a quick hike over fairly easy terrain, with fantastic views. The sun was bright, the trail verdant. Oddly, I really remember the cell phone towers, the farms and pastures, and the ski lifts everywhere. (If I learned anything, it’s that Vermonters love to ski.) I remember a lovely chat with a Long Trail thru hiker as we enjoyed our lunch with a magnificent view. As always, the trail’s gifts are in the hikers and their stories.

Along the way were some surprises. Reddington, with its sense of being a well kept secret, hidden away on an unmarked trail. On Camel’s Hump, a downed airplane. In the Carrabassett Valley, serenity. More and more, I saw those white blazes heading off to distant points, and I felt their tug. I learned about Benton MacKaye and Myron Avery. In no small part, they humanized the trail for me as much as Kate Sleeper and Arnold Guyot humanized the Whites. I chatted with locals. I learned about their communities. My horizons broadened.

Katahdin stood in stark contrast to Mansfield. I was a couple weeks into autumn, and rain was in the forecast. It was the hardest, most technical hike I’ve ever done, with some of the worst views, due to heavy cloud cover at the summit. If that wasn’t enough, the wind was howling at more than 50 miles per hour. And yet, that hike was one of the most rewarding — on par with how I felt after finishing Owl’s Head. And on the way down, I met some AT hikers, and learned their stories. That one mountain bestowed so many gifts, but it was merely emblematic of the trail’s bounty.

The other day, I returned to my beloved White Mountains, and specifically to Franconia Ridge, which is a spiritual home for me. I hiked Mt Liberty and Mt Flume, and gazed out over the Pemmigewassett Wilderness. I spied Owl’s Head, The Bonds, and South Twin. Garfield, Galehead, Whiteface. I looked down upon the maples, turning yellow and red, and thought about the coming winter. Whereas before I couldn’t have a single defined thought about all of those peaks, now, I have a bevy of memories from each of them. On the way down, I touched a lot of AT blazes, and thanked that trail for giving so much to me.

Returning to the trailhead, I looked back, then looked forward, and laughed out of sheer bliss.

Coronavirus has everything in a mess right now. If you’re planning on a hike, here are some things to think about before heading out. 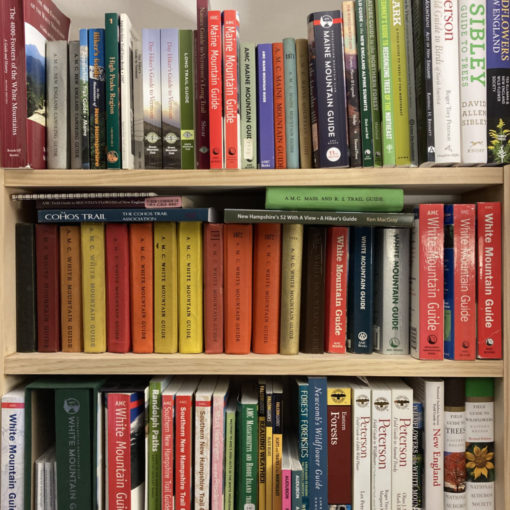