Perhaps like many of you, my readers, I’ve been following the news regarding the lost hiker in Franconia Notch. The short of it is that a 19 year old woman was trying to nail down the last few peaks on her 48 list before her upcoming 20th birthday. Sunday, she didn’t show up as expected at the trailhead where her mom had dropped her off that morning. Unfortunately, the ending wasn’t happy. Her body was recovered on Wednesday from an area near the headwaters of Lafayette Brook, to the northwest of the summit of Lafayette.

All this implores me to remind you: please, don’t get lost. While I do indeed think it’s OK to get “good” lost in the woods, at all times, your one and only destination shall be your safe return to the trailhead, regardless of whether you’re hiking a loop or a one-way traverse.

News sources near and far covered the story. One quote really caught my eye:

I really don’t like pointing the finger of blame at the dead. However, so her death might not have been in vain, it’s worth examining what went wrong. Note that I wasn’t there (of course) and I know only what was reported. I’ll update as I find out more. But it was pretty explicitly noted in the news that she was inadequately prepared. As I followed the story, day after day, I noticed that just about everything that the F&G Major cited as being essential gear was not carried by that hiker. She went up improperly dressed, wearing sneakers, not boots. No headlamp. No extra clothing. No means to create fire. No shelter or sleeping bag. I read somewhere that her water was in a Camelbak, which likely froze solid within a couple hours. She did take some sort of survival course, but it was geared toward summer hiking. Maybe the worst of all is that she had little to no winter hiking experience. Unfortunately, the conditions she experienced now, in the middle of autumn, were entirely indistinguishable from those you might find on any day in the middle of winter.

Something that will color this discussion will include my experience meeting scores of under-prepared hikers, and others who’ve made indications that they’re making poor decisions while hiking. I see this kind of thing happen a disturbing number of times.

First: If you’re in a bind, and it’s been some amount of time since you left the trailhead, it’s going to be that amount of time for rescuers to get to you, but before that can happen, they’re going to have to get your distress call, muster at the trailhead, create and communicate a plan, and then start moving toward you. You’re three hours in? Expect it’s going to be at least four+ hours for help to get to your side. When seconds count, help is hours away, so self sufficiency is key in the mountains. Moving on…

Humans are terrible at gauging risk. A lot of it rests on “that which didn’t kill me last time” but that argument disregards the role of luck, and sometimes that luck masquerades as skill. And so confounding this ill-fated trip was the fact that she had a few peaks left on her four thousand footer list, and her 20th birthday was this week. That’s a toxic combination when you have to gauge risk and your life is on the line. With that trip, she’d have nailed four peaks — a rather nice haul. But the weather was sour. Summit fever can be a great motivator, but it can also be a deadly one. I wrote two essays that are worth reading: one on Mental Factors, and the other on Risk Management.

When I finished the NE 67 list, I did so on Katahdin, and by the time I summited, the winds were howling, it was heavily misting, and in general, the conditions were “a bit rough.” Every few minutes, I kept asking myself if I needed to continue, or if I needed to bail. Obviously, it was a long drive to Baxter, so there was that on the line. But I felt well prepared, and while the weather was garbage, it was a fairly warm day (65 at the trailhead, mid-50s up top.) I was appropriately dressed, still feeling warm enough to continue. I may have been battling a gale force wind, but I wasn’t cold. More importantly, I was prepared to turn around at a moment’s notice, and that question was addressed many times over the span of the hour that it was relevant.

Similarly, one year to the day after I broke my ankle on Adams, I wanted to hike Madison. It felt right, and a way to “close the circle” on that fateful day. On the summit, the winds were howling. It was the end of December, so it wasn’t warm in the slightest. But my advantage was that the summit cone did a decent job of sheltering me from the worst of the wind, so I was only fully exposed to its full force for the last few minutes of the summit push. And moments after topping out, I was racing back down. Not long after, I was well away from the worst of the wind. That whole time, I was constantly assessing risk, and my gear and clothing preparations were on-point. I came “loaded for bear” and that’s part of what drove my success.

My suspicion is that being under dressed, the 30-40 MPH winds and zero degree (after windchill) temps on Sunday dropped her body’s core temperature quickly. When hypothermia sets in, your brain gets addled, and you make really crummy decisions. Then you suffer the consequences. You get colder, you make worse decisions, and things rapidly spiral downward. She was a sophomore at a prestigious college, working toward some kind of biology degree. In normal conditions, she was probably quite smart, but the mountains are dispassionate. It’s thought she lost the trail, leading to her peril.

Side note: it’s might be tempting to sip some booze to counter hypothermia. This is a fallacy. First off, no-one makes good choices once they’ve hit the sauce. You’re in lousy weather, miles from the trailhead, things are getting tough, and you’re going to add alcohol intoxication to your grab-bag of troubles? But also, booze may make you think you’re feeling warm, but it shunts blood (and hence, warmth) away from your core, out to your extremities, where it promptly radiates away on the wind. Save the drinks for after you’re safe, and sharing your “so there I was…” stories with friends.

One thing I noticed is that the headwaters of Lafayette Brook are at about 4,000 feet. If she’d descended along the brook, within about an hour, she’d have been well within the trees and out of the wind. But better still, she’d have been within a few hundred feet of Eagle Pass, at about 3,000 feet. A turn to the left (heading southwest) and she’d have been on the bottom half of the Greenleaf Trail in short order. An hour or so later, she’d have been at the Cannon Mountain tramway. This would have required some amount of decision making, as well as navigation skills, and the ability to use a map and compass.

If she was still in good shape, this would have been a decent option, but if the weather had already banged her up, an unlikely one. Any degree of hypothermia would have made that a tall order. This makes it all the more important to stay ahead of the game at all times, and bail out early if the weather is sour. Usually bad goes to worse long before it gets better. If you turn around, and an hour later, things do get better, you can always decide to head back up if there’s enough time left in the day, or just cut your losses by visiting some attraction on the way home that’s quick and easy to get to.

A lack of food didn’t cause her peril in and of itself. But it didn’t do anything to reverse her problems. When you’re cold, you start to shiver. This is your body trying to burn calories to create heat. But that can only work if you have calories to burn. You need to stoke the boiler. This is why it’s absolutely essential to bring lots of food in cold weather. When you’re not moving, you’re losing heat. Fats are 9 calories per gram, and it’s a long and slow burn. Carbs are 4 calories per gram, and they give you a quick burst of short-term energy. A balance of the two will get you going quickly, and keep you going for awhile. A combination of granola bars (grains and dried fruits) with some nuts and seeds (higher in fats) will do you well in winter. Putting some electrolyte powders in your water, and carrying it in an insulated carrier or a vacuum bottle will help keep it from freezing solid. A stove will give you the ability to make more water from snow. (Eating snow will cool you from within, bringing about hypothermia. Bad news!)

Shelter doesn’t have to be a fancy tent. Bringing a tarp and a couple emergency bivy bags (available at outfitters everywhere) can do in a pinch, while remaining fairly lightweight. A lightweight foam pad or air mattress will keep your body from direct contact with the ground, and help you lose heat more slowly. Similarly, if you can make a bed of tree branches, that’ll help retain your warmth.

Folks, hike safe. Bring adequate food, water, and supplies. Keep your goal for the day “your safe return to the trailhead.” Mind what time it is, and when the sun sets. (Pro Tip: around December-January, it’s around 4:30 in the afternoon; the day is of about 9 hours long for those months.) In the summer, but especially in the winter, a headlamp should be a permanent part of your kit. And educate yourself. If nothing else, study the map of the area you intend to visit, so you can create options on the fly. Know that if you follow water downward, you’ll eventually get off the mountain, but know which way to go down, so you’ll hit a road at the bottom, and not, for example, the Lincoln Brook Trail (between Lincoln and Owl’s Head) many miles away from any trailhead.

Where you’ll find me.

When you find my body.

Note, this is not, nor is it intended to be, a comprehensive list. I encourage you to continue studying; consider joining local trail associations, the AMC, the American Alpine Club, and other similar organizations, to help you learn more. 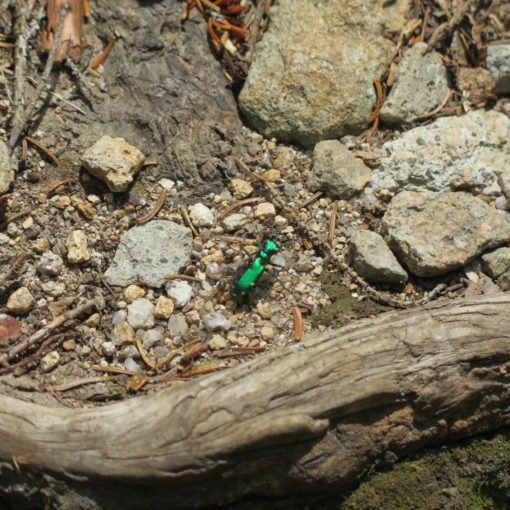 Hiking with the iNaturalist app can make your outings more interesting, by helping you understand the environment.